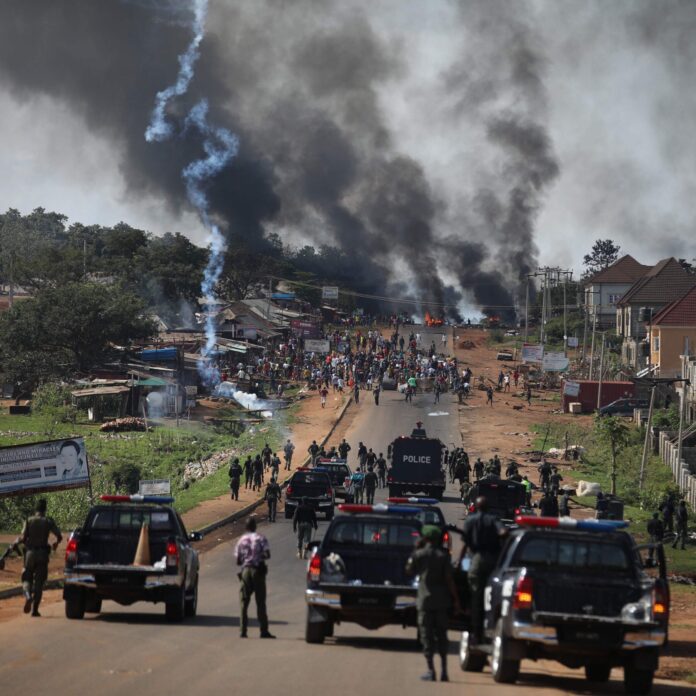 The Secretary-General and members of All-Africa Students Union (AASU) have condemned the Police and military brutality against peaceful demonstrators in Nigeria.

In a press statement issued by the Secretary-General, Peter Kwasi KODJIE, to commemorate the African Human Rights Day today, he called on the Nigerian government to bring the police and military antagonism against demonstrators to an immediate end.

Human Right issues in Africa have become worrisome due to frequent infringements on innocent people. The life of individuals in countries such as Central African Republic, Democratic Republic of Congo, Sudan, Nigeria, Mali continues to simmer as a result of the Protracted conflicts with indiscriminate and targeted attacks on civilians.

In recent past, armed groups in Cameroon, Mali, Nigeria, Somalia and other countries committed abuses and are still committing them. These abuses include killings and abductions, which has caused mass displacements. State security forces often replied with serious human rights violations such as extrajudicial killings, enforced disappearances and torture as in the case of what is currently happening in Nigeria.

These conflicts and insecurity together with new forms of communal violence that has emerged in Nigeria is a brutal reminder that Africa is a long way from breaking its deadly cycle of armed conflicts, violence and Human Rights abuses.

At least, 12 people are reported dead in the ongoing protest in Nigeria after armed Military men opened fire on protestors demonstrating on which initially focused on the Special Anti-Robbery Squad (Sars), a police unit that rights groups have long accused of extortion, harassment, torture and murder, to be disbarred.

Unfortunately, countless victims of these atrocious crimes and abuses have not seen justice and reparations.

The Secretary General is therefore calling on African leaders to act swiftly as Human Rights in Africa continues to be under threat.

Mr. Kodjie fears that the future of youth and students in Africa will be in danger if leaders do not salvage the challenges they face. He said, ”On this day, we remind ourselves as a Continent, our various engagements to ensure that all people can gain equality, dignity and freedom. Today, as we commemorate Human Rights Day in Africa, the situation of African students and youth remain grim. We could say that it is arguably the most challenging period in the realisation of human rights”.

He emphasized that, “The path has been challenging due to most African governments’ inability to see students and youth as constituents with genuine needs and concerns they must help to meet. Freedom of speech has been faced with suppression rendering most student unions and youth-focused organisations ineffective or useless”.

He advised African governments to provide a peaceful atmosphere for students and youth, while calling on them to end the brutality in Nigeria. He said, ”As representatives of African Students, we use this day to call on African governments not only to tolerate the rights of students and youth but to promote them as well. Students need sound and secure environments devoid of repression to access quality education. We also use this opportunity to state lucidly to governments of Zimbabwe, Malawi, Nigeria and Egypt to ease up on their suppression of student and youth rights.

Human rights in Nigeria is under attack by a government-mandated to protect its people. Police brutality and military antagonism have become the order of the day in recent times in that country, resulting in several lives being perished and many others sustaining injuries. Institutions that are supposed to be guardians of the people have now become warriors ending lives at will. We the students of Africa use this medium to tell the Nigerian government that its response towards peaceful demonstrations is heinous, heavy-handed and uneven, acts uncharacteristically of a supposed guardian”.

He outlined some measures to be taken in other to end the bloodshed in Nigeria.

“The Nigerian government brings the police brutality and military antagonism against peaceful demonstrators to an immediate end; Calm prevails with an assurance of safety and security by the Nigerian government; Dialogue with stakeholders to restore the situation to normalcy begins immediately.

Reformation of Nigerian Police into a people-centred service be done with inclusive urgency.”

He ended the statement by saying, “As staunch supporters of inclusivity and justice, we stand for all human rights and students rights, not only those that are convenient to us. We admonish African governments and civil society organisations to advance the rights of students and recognise students and youth as transformative agents of change and progress that Africa seeks. Together we can commit to protecting and defending them today and every other day”.