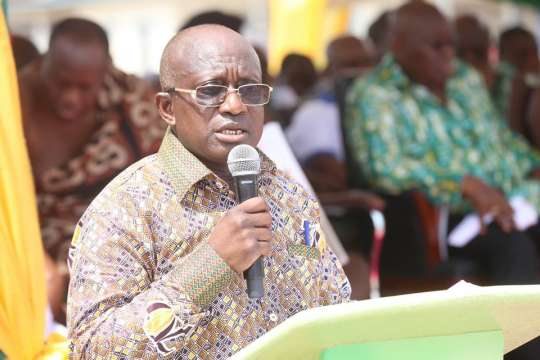 The Ashanti Regional Minister Simon Osei Mensah has told residents of the region that President Akufo-Addo cannot fix all roads in the region even if he is given another term in office.

“Definitely we can’t do all the roads. Even if you add the next four years to us (NPP) I cannot promise the people of Kumasi and Ashanti Region that all roads would be done. That one I would be lying to the people; that one it is not possible,” Mr. Osei Mensah told Kumasi-based Hello FM.

He, however, said the government will make efforts to work on the most important roads in the Ashanti region.

“We will work on most of the sensitive ones. That is how we are doing it. When we realize this one possesses threat, then we fix it. So we have to work on the main roads with huge traffic,” he said.

Meanwhile, President Akufu Addo says Minister of Roads and Highways Mr. Amoako Atta is the best of Road Ministers Ghana has ever produced since independence.

“Amoako Atta is a great man, the kind of work he has done in the last two years in the road sector is beyond expectation. In the history of Ghana, we can’t get any road Minister who has performed better than Kwasi Amoako Atta” President Akufo Addo stressed.

According to the President, Mr. Amoako Atta’s sterling performance in the road sector is evidence on the grounds, adding that his footprint is all over the sixteen regions of Ghana.

Addressing a durbar of the Chiefs and people of Akwatia as part of his campaign tour of the Eastern Region, President Akufu Addo stated that the NPP’s development projects don’t exist in green books, their works are physical projects that can be seen and felt.