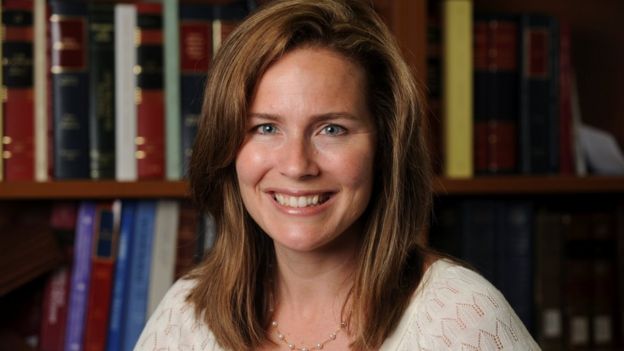 President Donald Trump’s nominee for the Supreme Court, Amy Coney Barrett, is appearing before senators in what has been billed as a “contentious week” of confirmation hearings.

But her nomination so close to the 3 November presidential election has sparked a political row between the Republicans and rival Democrats.

The panel’s top Republican began by vowing to confirm the “great woman”.

But one Democratic senator on the committee described the process as “shameful”.

Judge Barrett’s approval would cement a 6-3 conservative majority on the nine-member top court, shifting its ideological balance for potentially decades to come.

The Republicans – who currently hold a slim majority in the US Senate, the body that confirms Supreme Court judges – are trying to complete the process before Mr Trump takes on Democratic rival Joe Biden in the election.

In his opening statement, committee Chairman Lindsey Graham described Ms Barrett as being “in a category of excellence, something the country should be proud of”, but predicted “a long contentious week” of hearings.

“Simply put, I do not think we should be moving forward on this nomination,” she said, calling for the hearings to be delayed until after the election.

“From that moment this process has been nothing but shameful. Worse, it will almost certainly lead to disastrous consequences for Americans.”

Iowa Republican Chuck Grassley predicted that Democrats would “rustle up baseless claims and scare tactics” in an attempt to “smear” the nominee and will “outright disparage her religious beliefs”.

What will Judge Barrett say in her opening remarks?

In what is effectively an interview for the job, the confirmation hearing will give Judge Barrett a chance to explain her legal philosophy and qualifications for the lifetime post.

In prepared remarks released ahead of Monday’s meeting, Judge Barrett thanks President Trump for “entrusting me with this profound responsibility”, which she calls the “honour of a lifetime”.

In the speech, Judge Barrett will speak of the importance of her family and how her parents prepared her for a “life of service, principle, faith, and love”.

Judge Barrett will pay tribute to judges she has worked with, including former Supreme Court Justice Antonin Scalia.

Justice Scalia’s reasoning “shaped me”, Judge Barrett will say. “His judicial philosophy was straightforward: A judge must apply the law as written, not as the judge wishes it were.”

Judge Barrett will say she has “resolved to maintain that same perspective” in her legal career.

It is up to elected politicians to make “policy decisions and value judgments”, not Supreme Court justices, Judge Barrett will say.

“In every case, I have carefully considered the arguments presented by the parties, discussed the issues with my colleagues on the court, and done my utmost to reach the result required by the law, whatever my own preferences might be,” she will say.

“When I write an opinion resolving a case, I read every word from the perspective of the losing party. I ask myself how would I view the decision if one of my children was the party I was ruling against.”

What about coronavirus concerns?

The hearing room has been prepared in consultation with health officials to ensure that social-distancing rules will be met.

Senator Kamala Harris, the Democratic vice-presidential nominee who is known as one of the toughest questioners in the chamber, has said she will participate remotely from her Senate office.

After the hearing ends, any committee member can require an additional week before the formal vote. It is not clear if the members will be able to vote remotely.

After that the Senate – the upper chamber of the US Congress – will vote to confirm or reject Judge Barrett’s nomination.

Republicans already appear to have the 51 votes needed to get Judge Barrett confirmed.

Senate majority leader Mitch McConnell has vowed to hold a confirmation vote before the presidential election.

Barring a surprise, Democrats seem to have few procedural options to prevent her gliding through the Senate to the Supreme Court bench.