The Member of Parliament for the North Tongu constituency, Samuel Okudzeto Ablakwa has sent a strong signal to his contenders that he will pull an overwhelming 98 percent of votes in his constituency at the December polls.

The MP who filled his nomination at the North Tongu district office of the Electoral Commission on Monday noted that his achievements in the past eight years are his biggest weapon going into the 2020 polls.

He said, “We are determined to secure at least 98 percent for ourselves; 98 percent for John Mahama and our parliamentary candidate, my good self, Samuel Okudzeto Ablakwa because we have the track record. If you look at how we even responded to this pandemic, there are very few places that can compare; we are one of the very few constituencies who paid our private school teachers, we provided textbooks to all our students who were at home, we have purchased PPEs and other machines for carrying out the Covid-19 test, we have built an isolation center at the Battor Catholic hospital and many other interventions we have done.”

In the area of development, the MP says he is unmatched.

“In the area of development, even though MPs are not necessarily development agents, I have been able to lobby to bring in so many development projects; the Volo secondary school, the Juapong Adidome road, Mepe Dove road, the various CHPS compounds we have completed.”

“I have used my own resources to complete a number of CHPS compounds including that of Nyatikpo and so many things we have done. So we would continue with our track record, because we are working hard and responding to the felt needs of our people, bringing them development, improving their lives and making them feel Ghanaian,” he added.

Samuel Okudzeto Ablakwa who is seeking a third term bid having been in Parliament since 2012 would be the first person to have been given such opportunity to represent the people of North Tongu for three consecutive tenures.

The young budding politician bust onto the political scene when he was first appointed as the Deputy Minister of Information in 2009 under late Prof. Evans Atta Mills’ administration having played a key role leading up to the party’s victory in the 2008 polls.

He was subsequently appointed the Deputy Minister of Education in charge of tertiary education under former President John Dramani Mahama until the NDC lost power in 2016.

Samuel Okudzeto Ablakwa is currently the Ranking Member of Parliament on the Foreign Affairs Committee. 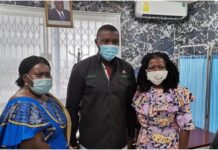