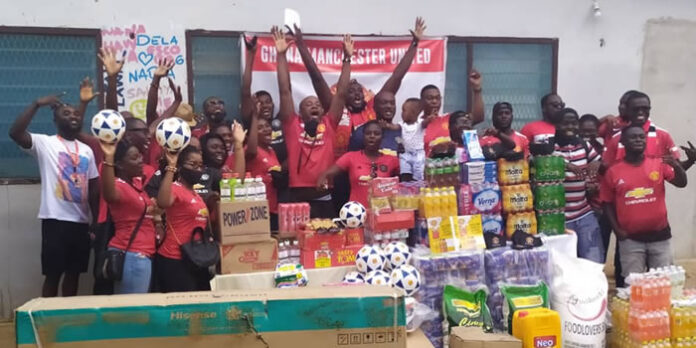 Speaking at a short but colorful presentation ceremony, chairman of the club, Mr Samuel Anim Addo expressed the group’s delight for the support and added that the Manchester Foundation will in the coming days further assist the orphanage with a sum of 500 GBP to help carter for its activities and other expenses.

According to him, as a support club of a great club like Manchester united which has over the years topped the list of significant football assets without dispute, it was imperative that it extends its helping hand to the needy in the society.

On his part, Director of Nectar Foundation, Rev. Fred Anyasor-Nartey. commended the GhanaMUSC for its kind gesture and also selecting the orphanage among others for the support.

He again appealed to the group for more of such supports.
He also seized the opportunity to call on other associations, individuals and groups to emulate this kind gesture by coming to the aid of the orphans.

Mother of the home, Madam Fredrica Akuffo who took delivery of the items expressed her profound gratitude to the club for the support and promise to use the items for their rightful purposes.

The Nectar Foundation is a non-governmental organization (NGO) initiated and founded in 2002 by Reverend Minister of the Presbyterian Church of Ghana Felix A. Anyasor (late).
The mission of the foundation is to provide food, shelter, health needs and education to the vulnerable and children orphaned by HIV/AIDS. The foundation is currently supporting over 20 children between the ages of 8 and 21. Nectar employs three full-time staff to look after the children.
Source: ghanadistricts.com