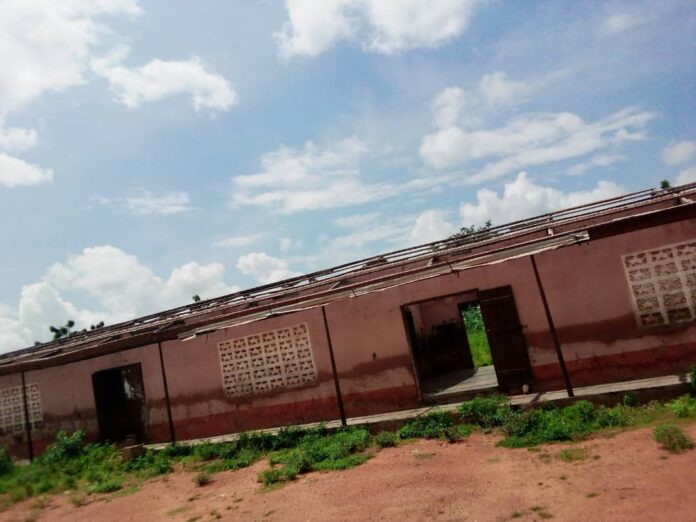 The Saboba EP primary school has been left to rot for more than a year now after it was ripped off by heavy rainstorm last year leaving the school with no classrooms to study.

The rainstorm which occurred in July 2019 ripped off the roof of the only three-unit classroom block serving the school.

The classrooms have now turned to a hub for snakes and other wild reptiles including livestock as it has been abandoned by authorities.

The school of a population of about 200 rely on the three classrooms for academic work. The situation has now forced them to learn under trees. Pupils also do not attend school anytime it rains in the morning and closes anytime it threatens to rain during school hours.

Several reports and appeals to the Ghana Education Service and the District Assembly have fallen on deaf ears, according to authorities of the school. Headteacher of the school, Mr Sabastian Waaki noted that his outfit wrote several letters to GES and Saboba District Assembly and made several follow-ups yet nothing have been done.

The Parent-Teacher Association, PTA of the school on their part also met with political leaders in the District over the matter but no positive response has been given.

Residents of the community are worried their children might not be able to go back to school when the President gives the go-ahead.
They also fear the situation if not given urgent attention will have a devastating effect on their wards as it might cause school dropout.

They have also threatened not to take part in the December 7 elections if the situation is not addressed before the time. “We are afraid our children cannot go back to school when school re-opens because they don’t have anywhere to sit and learn. We will not also go out to vote for anyone if they can’t roof the only school we have, why do they want our vote and don’t want to help us” a resident, John Ntaadi said.

The community members have therefore called on government, politicians and other relevant authorities to as a matter of urgency re-roof the school or have them to contend with.