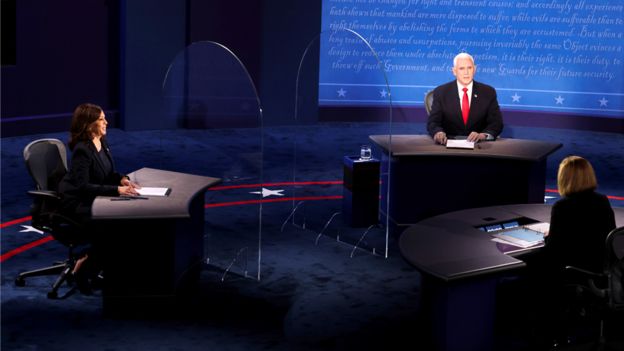 A live TV debate between the candidates for vice-president ahead of next month’s US election has seen fierce clashes over the coronavirus pandemic.

Democrat Kamala Harris accused Donald Trump of “the greatest failure of any presidential administration” in history.

Opinion polls indicate the Republican president is trailing by single digits in a handful of battleground states that will decide who wins.

This was a civil debate between two smooth communicators compared to last week’s belligerent showdown between Mr Trump and Mr Biden, which degenerated into insults and name-calling.

Mr Pence did not interrupt as much as the president last week, but when he did Ms Harris interjected: “Mr Vice-President, I’m speaking, I’m speaking.”

Indeed the viral moment on Wednesday night that seemed to create the most buzz was a fly landing on Mr Pence’s head and remaining there for some two minutes.

But there were heated exchanges.

What was the main talking point?

In the 90-minute live debate at the University of Utah in Salt Lake City, Ms Harris accused Mr Pence and the president of deliberately misleading Americans about the lethality of coronavirus.

“They knew, and they covered it up,” she said, adding that they had “forfeited their right to re-election”.

Mr Pence accused the Biden-Harris campaign of copying the White House’s pandemic strategy, alluding to a blunder that ended Mr Biden’s 1987 run for the presidency when he plagiarised a speech by then-British Labour leader Neil Kinnock.

Ms Harris was asked by the moderator whether she would take an approved Covid-19 vaccine distributed ahead of the election.