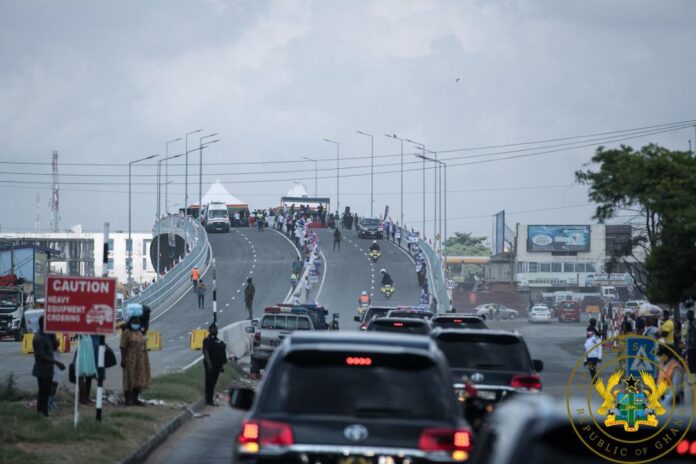 Akufo-Addo has commissioned phase one of the Obetsebi Lamptey Interchange Project, which has been completed five (5) months ahead of schedule and is now open for use by motorists.

The completion of Phase One will enable the Contractor, M/S Queiroz Galvao-UK International, to begin work on Phase Two.

Speaking at the ceremony to commission the Interchange on Tuesday, 24th November 2020, President Akufo-Addo stated that “the Completion of the Phase 1 of the Obestebi Lamptey Interchange shows the seriousness that my Government attaches towards addressing the congestion within some of the major cities of our country.”

Having already commissioned Phase One of the Tema Motorway, work on the second phase is scheduled to commence soon.

“This is the first time in the nation’s history that more than five (5) interchanges are being constructed within the first term of any Government. So, if any more reasons to give Nana and the NPP four more to do more for you, this is one of them,” he added.

In addition to the construction of these interchanges, Government, through the Ministry of Roads and Highways, according to the President, is undertaking critical road projects to improve urban mobility in the country.

These include, he said, the completion of over one thousand (1,000) kilometres of asphalt overlay works throughout the country; the construction of the Teshie Link, popularly referred to as the LEKMA Road, is ninety percent (90%) complete; the construction of Tema Steelworks road, the only concrete road to be constructed by Government after the Accra-Tema Motorway, is 90% complete.

Further, he told the gathering that the Kumasi Roads and Drainage Extension Project, which includes the dualization of the Lake Road and lining of the Sissai River Drain in Kumasi, stands at 64% complete.

“The Ministry of Roads and Highways, through the Department of Urban Roads, is reviewing proposals to address the congestion challenges on the Kaneshie-Mallam Highway. This is necessary to reduce the discomfort that commuters go through around the Kaneshie Market area, First Light intersection, and the Sakaman–Mallam section of the road,” the President said.

He encouraged the Ministry of Roads and Highways to take a closer look at the corridor as a major public transport one, and put in the necessary infrastructure for a future Bus Rapid Transit system that Government intends to develop along the route.

“With Phase Two about to commence, I appeal to all, motorists, residents and business owners, to co-operate with the Contractor and the Department of Urban Roads to help ensure that, just like Phase One, this Phase will also be completed ahead of schedule,” he added.