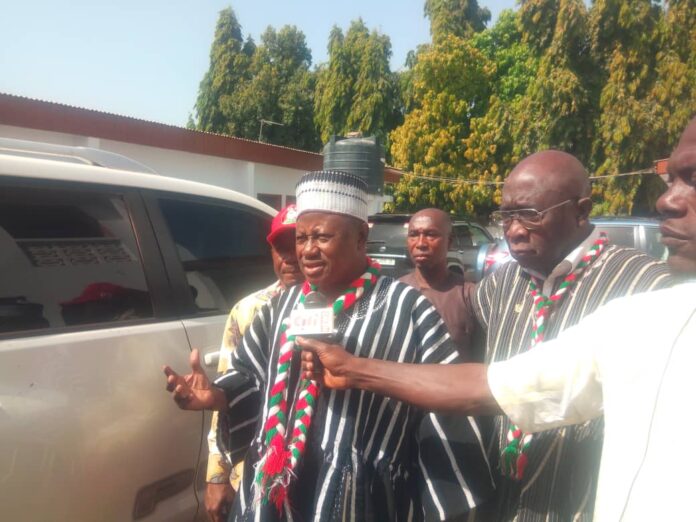 The presidential candidate of the People’s National Convention (PNC), David Apasera, has served a strong warning to armed robbery gangs in Ghana that his government will have them killed from a helicopter gunship if the Jubilee House race goes his way this month.

He sent out the notice with fury in response to questions from Starr News on residents’ concerns about what they describe as an unprecedented outbreak of armed robbery attacks in the Upper East regional capital, Bolgatanga.

“You need to have a professionally trained paramilitary group to handle the security. The police are there, yes. The police are there. You also need to equip the police properly. You have to give the police bulletproof jackets, night goggles and so on to fight crime. But the criminals block you in the middle of the road in the bush. Now, how would the police respond? They have to come with a siren. And if they are driving from here (Bolgatanga) to Walewale, which is about 32 miles, how long will— by the time they reach there, they have vandalised you.

“We are saying that we will have this paramilitary organisation under the command of an army officer of the status of a lieutenant, a captain or major. And, then, we will have a military gunship stationed in every regional capital. The moment they get the signal that some people have blocked anywhere, the helicopter gunship is in the air within the shortest possible time. When criminals know that when they confront you they will be fired from the top, they will not confront you. What we want to do is to ensure the harm is not done. People are suffering. That’s our policy. When we come, we are going to take it up,” assured the Zuarungu-born former Member of Parliament (MP) for the then Bolgatanga Constituency (now split into Bolgatanga Central and Bolgatanga East).

The policy, he pointed out, would not do away with the police but would set up the paramilitary organisation to supplement the operations of the police in a more state-of-the-art approach against armed criminals.

The PNC’s vice-presidential candidate, Dr. Divine Ayivor, and the National Chairman of the party, Moses Dani Baah, were present when the former lawmaker fired the warning at lawbreakers at the close of a campaign tour of the Upper East Region.

Adding his voice, the party’s running mate told newsmen the governing New Patriotic Party (NPP) did not deserve endorsement from the electorate at the December 7 polls. He gave reasons for saying so, among them a claim that some communities in Ghana had been so deprived of potable water that they had resorted to drinking “yellow water” from swamps against their will under the NPP government.

“We have seen people drinking from swamps called dams in 2020. These are swamps for animals to drink from and yet the citizens are drinking from the same water. And they are supposed to be grateful for being offered a swamp to drink in. You will see one yellow water in a dam which is a swamp that animals are drinking from and people are boiling to drink. Look, no more four years of suffering poverty, despondency, hopelessness— no!

“Young men need to get married. You see many beautiful women around but the young men don’t have the wherewithal to provide the dowry to marry. If you don’t do that your population will never grow. Change your voting system. Give Apasera a chance for the first time. You give him four years. Let’s see what he brings. That’s all I’m asking for,” Dr. Ayivor said.

When former President Jerry John Rawlings passed on in November, this year, the government declared a week-long mourning period in his memory.

Political parties suspended their presidential campaign activities to mourn the nation’s longest-serving leader. But the PNC did not. Moses Dani Baah explained why to the press.

“PNC started its national campaign too late. We had our national congress on the 30th of September. A week later, we were asked to file for presidential and parliamentary candidates to contest the 2020 elections. We took barely three weeks to complete all these, and we had not started campaigning all this while. It was only last week that we decided that we needed to leave Accra and go into the hinterlands. In fact, we decided that we needed to start from the north, where we come from, and sell our message to our people.

“It was on our way to Bawku that we heard about the passing of J.J. Rawlings. It was simply too late for us to suspend our campaign. There was no time. If we had started our campaign earlier like the other parties did, we would have suspended it and honoured J.J. Rawlings,” said the former MP for Sissala East and ex-Deputy Minister for Health.