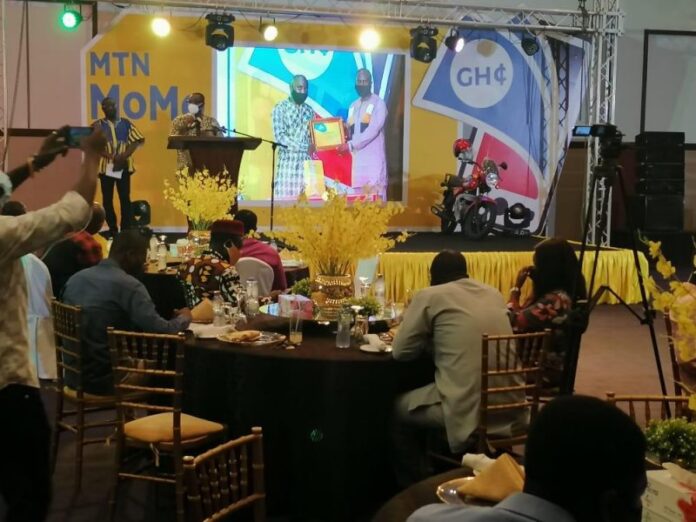 The prizes range from a Nissan vehicle to mobile phones and plaques.
An Agent at the Modern Action Ventures at Nkroful Junction, Madam Rita Kwaku was adjudged the Winner of the 2020 MTN Awards and received a Nissan vehicle for her loyalty and dedicated services to MTN.
The first runner-up awardee received a motorbike and a cheque for GHc10,000 while the second runner-up got a motorbike and a cheque for GHc 5,000.
All the 300 Agents and 250 Merchants received priceless awards ranging from motorbikes, flat screen TV sets, tablets, phones and plaques.
In an address, the Chief Executive Officer (CEO) of Mobile Money Limited at MTN, Mr. Eli Hini expected the year would be more business friendly than 2020, which was plagued by COVID-19 pandemic.
He said the award scheme, which has been in existence since 2014 to honour excellence, would be sustained in the coming years.
Mr Hini lauded the agents and the merchants for their perseverance to provide services to customers during the COVID-19 lockdown period.
The CEO said MTN acknowledged the efforts of its Agents and Merchants who continued to provide loyal services to customers.
He warned those, who had formed a clique with customers to earn commission through fraudulent means, adding that such a behaviour had dire consequences for the business.
Mr Hini disclosed that some Agents and Merchants, who collaborated with fraudsters to dupe customers had lost their jobs.
As part of measures to weed out fraudsters, MTN Identity (ID) cards would be made available to them.
Mr Hini advised customers not to disclose their Personal Identification Number (PIN) to any Agent or Merchant nor hand over their handsets to them for any transactions and also to avoid entertaining phone call transactions.
The South West Regional Manager, Mr. Ben Nyarko acknowledged the significant milestone chalked by MTN Momo in 2020 and reiterated the need to celebrate the lives and services of Momo agents and Merchants for their contribution to the growth of MTN.
Source: GNA