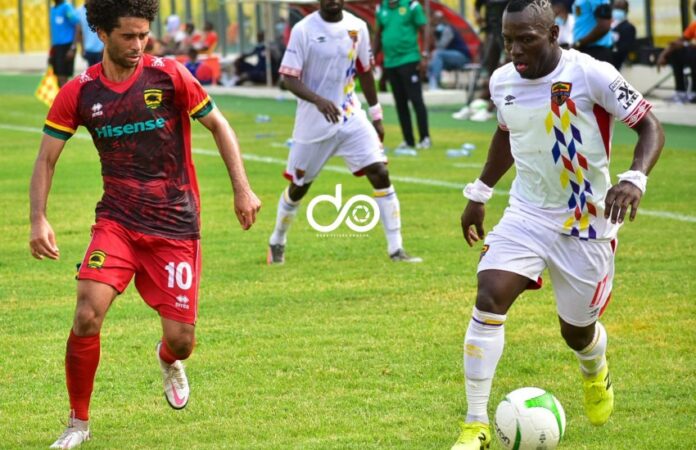 Ahead of the biggest game of the season over the weekend, eternal rivals Asante Kotoko and Hearts of Oak will be in midweek action on Wednesday and Thursday respectively.

Accra Great Olympics will extend an invite to Bechem United to the Accra Sports Stadium on Wednesday while Berekum Chelsea will also battle it out with Elmina Sharks at the Golden City Park.

At the Len Clay sports stadium, title contenders Asante Kotoko will look to have a good prep against Karela United ahead of their weekend top of the table clash.

Dreams FC will play Eleven Wonders knowing that a win could see them rise to third on the league table at the end of the game week.

King Faisal has an uphill battle against Medeama Sporting Club, with the fight for relegation growing intense in the last few fixtures.

WAFA will also go head-to-head with Aduana Stars, who have just one win in their last four games in the top-flight.

On Thursday, Legon Cities will play host to Hearts of Oak in an attempt to break the Phobians’ unbeaten run of form.

The Cape Coast stadium will oversee the encounter between Ebusua Dwarfs and Inter Allies while the fixture between AshantiGold and Liberty Professionals in Sogakope will climax the match-day 30.

The current top four teams on the league table in orderly manner are Hearts, Kotoko, Karela and Medeama.