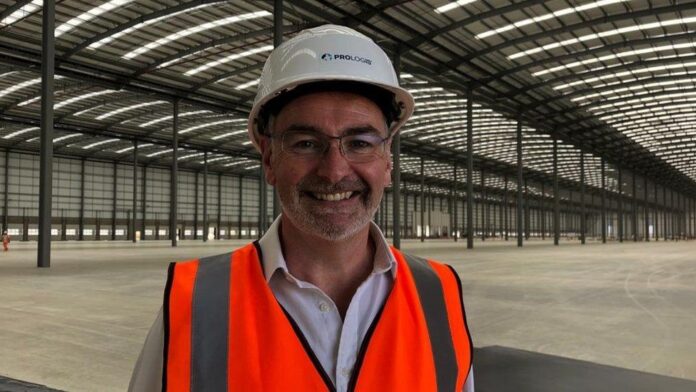 “I’ve been working in logistics for 30 years and I’ve never seen demand like this,” says Robin Woodbridge.

The company he works for, Prologis, owns and manages warehouse logistics parks across the UK.

They’re building as fast as they can, but it’s been a struggle to keep pace with the boom in online shopping in recent years.

And the pandemic has only served to accelerate the trend, making warehousing hot property.

Prologis’s biggest park, known as Dirft, is just off the M1 near Northampton. You can see the big sheds towering over the fields from the motorway. It’s a vast site with three rail freight terminals.

When you click to buy online, there’s a good chance the product will start its journey here, whether that’s baked beans, laptops, furniture or fashion.

Despite its size, it’s not big enough.

Hundreds of construction workers are beavering away on expanding the site.

“We’re building buildings speculatively, which means we haven’t got a customer lined up, and we’re letting them before we finish, something which doesn’t happen very often,” says Mr Woodbridge, who is head of capital deployment for the firm.

It wasn’t that long ago that warehouses were unloved by investors, who continued to pour money into retail and office space.

But things look very different now. Our High Streets and town centres are grappling with too much retail space and the logistics sector can’t build warehouses quickly enough.

New research from Savills, commissioned by the UK Warehousing Association, shows the dramatic increase in warehouse space in the last six years.

The occupancy mix has also changed. In 2015, High Street retailers were the dominant occupiers, but now they’ve been overtaken by third-party logistics providers, like DHL and Yodel, who fulfil and deliver most of our online shopping.

The biggest take-up in space, as the chart below shows, has come from the so-called pure-play online retailers, firms that don’t have physical stores and only sell online, such as Boohoo. These online retailers have increased their warehouse footprint by 614% in just six years.

The sheds themselves are also getting bigger. At Dirft, a super-sized building is taking shape which is the size of ten football pitches. The warehouse will be Royal Mail’s biggest parcel hub, processing more than a million packages a day.

He reckons that for every additional billion pounds in spending online, a further 775,000 sq ft of warehouse space is needed to support it.

When this vast logistics park is eventually filled, some 15,000 people are expected to be employed here. A new training academy will open shortly to help attract and train people for a career in logistics.

“Gone are the days when you had a man in a brown coat,” says Kevin Mofid, head of industrials and logistics research at Savills.

“As online retail has grown, the type of people required in warehousing has changed as well, now it’s robotics engineers and data scientists. Warehouses have become huge centres of technical excellence to gain efficiencies.”

And he believes there’s a long way to go before the UK reaches “peak shed”.

Savills tracks how much warehouse space companies require and says that demand is continuing to soar, by 232% in the first quarter of this year compared with the same period in 2020.

“There’s also increased demand in manufacturing and automotive. For instance, there will be new battery plants for electric vehicles, and as a result of Brexit, companies will want to store more goods in the UK,” he believes.

It may prove a challenge to continue expanding at this pace.

Peter Ward, chief executive of the UK Warehousing Association says the government needs to recognise the importance to the economy of this fast-growing sector.

“While we hear a great deal about building 250,000 new homes each year over the next five years, the fact that this will create a million new delivery points seems to have been largely overlooked.

“It is high time for warehousing to be baked into planning policy, in the same way, that GP surgeries and schools are an accepted part of infrastructure planning,” he says.