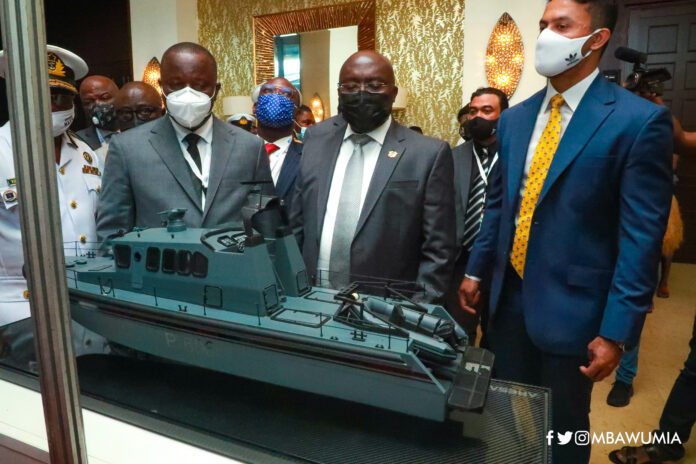 The Vice President, Dr Mahamudu Bawumia, has opened the 2nd edition of the International Maritime Defence Exhibition and Conference (IMDEC ‘21) with a call on countries bordering the Gulf of Guinea and stakeholders in the international maritime industry to collaborate and develop a regional and international framework to address the rising scourge of piracy along the coast.

IMDEC ’21, co-hosted by the Ghana Navy and the Ghana Air Force, is bringing together participants from over 70 countries including Ghana’s Minister for Defence, Hon Dominic Nitiwul, about 15 Chiefs of Navies and Air Forces, over 30 speakers and exhibitors in a concerted effort to brainstorm and come up with long term solutions to address the surge in attacks by Pirate Action Groups (PAGs) and increasing incidences of Kidnapping For Ransom.

Speaking at the opening ceremony on Wednesday, July 7, 2021 Vice President Bawumia noted that the perpetrators of criminal activities at sea have not been deterred by the paralyzing effects of COVID-19, indeed, have rather stepped up their attacks, hence the need for all to act expeditiously to safeguard our maritime domain.

“As nations seek to readjust and realign themselves in respect of trade, development and economic growth post COVID-19, coastal states and even land-locked countries have a huge stake in dealing with matters governing maritime security. For one simple reason: whatever measures and strategies put in place to revive economies would largely depend on trade.

“It is a fact that more than 90 percent of international merchandise is moved by sea. Therefore, international trade cannot be revived without a secure maritime domain”, he pointed out.

Reports indicate that a total of 79 actual and attempted attacks were carried out in 2020 in the Gulf of Guinea, representing a 34% increase as compared to 59 attacks recorded in 2019.

Similarly, there was a rise in the number of cases of Kidnapping for Ransom (KFR) and hostage-taking. In 22 separate attacks recorded in 2020, 130 out of 135 persons kidnapped globally were reportedly abducted in the Gulf of Guinea alone. This represents 95% percent of all kidnapping cases with Nigeria recording 62, Benin 29 and Ghana 6.

The situation has become even more precarious considering that over the past two months, about 10 crew members of two Ghanaian-flagged fishing vessels have been abducted in separate incidents along the Gulf of Guinea.

“The first half of the year (2021) has witnessed greater piracy threat and activities with over 30 recorded incidents. These incidents led to some renowned maritime security institutions issuing warning notice to all vessels plying the Gulf of Guinea. This is detrimental to the security and economic interest of the region,” he warned.

Outlining a number of measures being undertaken by the Government of Ghana, including acquisition of Offshore Patrol Vessels (OPVs), Fast Patrol Boats and Crafts, and the construction of Forward Operating Bases on the coastal frontiers, Vice President Bawumia said government will also see to training and welfare of the Naval Personnel to put in their best and to remain professional in the discharge of their duties.

“Other stakeholders are not being left out of the task as the Ghana Maritime Authority, Ghana Ports and Harbours Authority, the Fisheries Sector, the various institutions in the oil and gas sector and the entire maritime industry, are being supported and encouraged for their own transformation.

“That is not all, government is set to endorse a comprehensive National Integrated Maritime Strategy that will enhance interagency cooperation and thereby boost the collaboration among Land, Sea and Air Forces and key stakeholders in the country. This is required because securing the maritime domain for a developed blue economy entails coordinated actions among all key stakeholders in the country.”

“It is also important to remind ourselves that the threats to maritime security and safety transcend borders. They affect international trade. A threat to one coastal nation is a threat to others. The sea is the super highway for global trade and Africa’s quest for a Continental Free Trade Area cannot be successful without a secured maritime domain.

“The Ghana government therefore deems it important to ensure effective cooperation and positive collaboration among Regional Navies through coordinated maritime law enforcement activities especially the integration of the Naval and Air Forces’ efforts in suppressing insecurities in the maritime sector, building trust among partners through information-sharing and application of best management practices.”