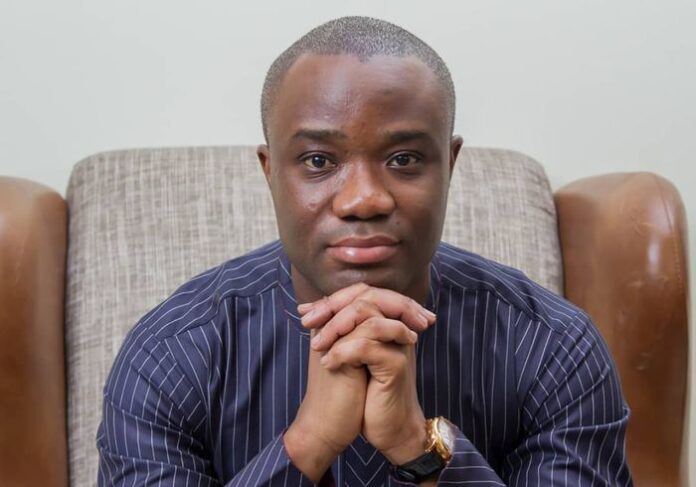 So,ubiquitous Gabby Asare Otchere Darko,cousin of President Akufo-Addo,appears rankled by comments made by President John Mahama on his “Thank You” tour which has seen him visit five regions so far.

Gabby is particularly irked that President Mahama stated that the NPP is desperate to continue in government after 2024 to cover up for their unprecedented corruption and looting.

In a rambling write-up on his Facebook page,the chief spin doctor of the Akufo-Addo government seeks to defend his cousin’s disastrous record amidst copious use of sophistry and thinly-veiled propaganda.

Gabby arrogates to himself the right to determine what the NDC can or cannot comment on when he asserts that CSOs,who themselves have been at the receiving end of attacks by his elderly cousin,the President,for seeking to hold him to account,are better placed to comment on corruption and not the NDC.

While Gabby’s misplaced angst is amusing,it is the delusional bubble he has ensconced himself in,that is most perplexing.The widespread belief among Ghanaians that his cousin,Akufo-Addo,helms the most corrupt government under the fourth republic is hardly the doing of President Mahama or anyone else for that matter.It is a direct product of the graft and governmental putrefaction that has been orchestrated and executed by the clannish cabal that runs the country at the moment.

It is not too difficult to glean the basis of Mr Otchere Darko’s latest intervention and his obvious discomfort at the mention of accountability after the Akufo-Addo era.

Despite the facade of being an outsider,Gabby’s centrality in the Akufo-Addo/Bawumia government is the worst kept secret this side of the Sahara.It is also widely known that any accounting to be done by his cousin at the end of his tenure may involve him given that he is front and center of many of the things that have brought this government into public opprobrium.

He deploys many ludicrous claims in his insipid defense but there are a few that provide the most vivid illustration yet of the futility of his latest attempt to proof his cousin against genuine criticism.

He expresses bewilderment that the NPP is unable to fend off charges of corruption emanating from the NDC,yet evidence of his cousin’s affinity for and endorsement of corruption is legion.Only weeks ago,he laughed off the serious matter of the violation and vandalization of all relevant laws governing public procurement in Ghana by his Health Minister in the Sputnik V vaccine corruption scandal.

Despite having removed a whole Electoral Commissioner and putting former government officials on trial for supposed procurement breaches,President Akufo-Addo has flatly refused to dismiss and or prosecute the offending Health Minister.

It would be cliche to provide the list of dozens of glaring cases of corruption that his cousin has swept under the carpet and failed to deal with.Those cases and the subsequent inaction put it beyond debate that President Akufo-Akufo leads the most corrupt government in our nation’s history.

For more nuanced anti-corruption watchers,it is the outright war of attrition and retribution waged by President Akufo-Addo against Daniel Domelovo, whom he removed for daring to surcharge his Senior Minister over the Kroll corruption scandal and the deliberate interference in the work of Martin Amidu which led to his resignation as Special Prosecutor,that cement his legacy as the leader of Ghana’s most corrupt government ever.

Mr Otchere Darko also cites a GHS 20 billion debt service bill in 2016 as water-tight evidence of mismanagement of the economy under his cousin’s predecessor,President Mahama.

The crippling debt service burden is of course the direct product of the astronomical rise in the public debt which the Akufo-Addo/Bawumia government has ballooned from GHS 120 billion in 2016 to GHS 334 billion in June 2021.

Anecdotal to this horrendous debt burden is the unsettling display of nepotism,conflict of interest and insider dealing by the very man who contracts the loans responsible for the swelling of the debt,Finance Minister,Ken Ofori Atta.Mr Ofori Atta has tapped his own company,Data Bank as a transaction advisor for the issuance of bonds which have become a mainstay of this government’s strategy.In effect,the Finance Minister pays his own company millions of Ghana cedis to issue bonds on his behalf as Finace Minister.

If ever evidence existed that the public purse has been treated as an Akufo-Addo family heirloom,this would be it.

The biggest chink in Gabby’s defensive armor in the matter of Akufo-Addo’s corruption,is the claim that his cousin is building District Hospitals for $17 million when they were built for $ 30 million under President Mahama.

Here,he was simply displaying astonishing naïveté or he was feigning philistinism over the workings of a government he is overwhelmingly influential in.

Surely,Gabby is aware that on the 19th of August,2020 his cousin the President,cut sod at Shama after awarding a contract for the construction of a 100 bed District Hospital at a cost of $ 41 million,which is $11 million higher than the 130 bed District hospitals John Maham built at $30 million.

There will be an accounting after the torrid Akufo-Addo years end in a little over three years from now and it is understandable that Gabby would have jitters at the prospect of he and his phalanx of cousins no longer ruling the roost as they do now.

Placed within this context,it is perfectly understandable why Gabby would be so incensed at Mr Mahama’s candid observation.