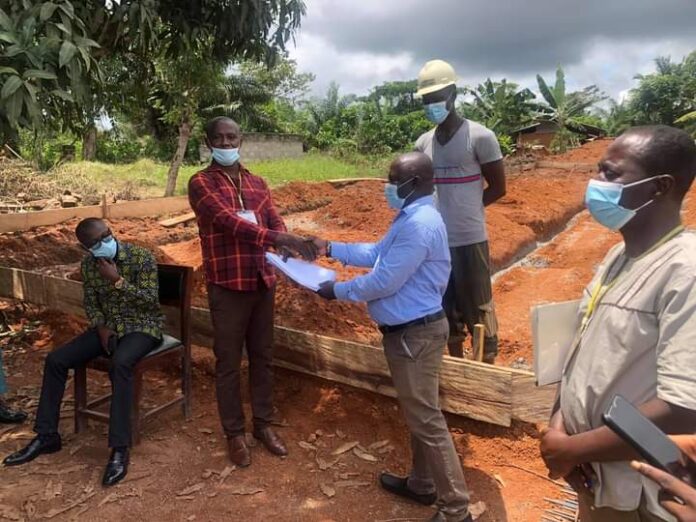 The West Akyem Municipal Assembly in Eastern Region have handed over a site for construction of a 3-unit classroom block and ancillary facilities such as library, office and 6-seater toilet facilities for Onyanfunso M/A Basic School after Starr News report on the terrible condition of the school building which has to led to mass withdrawals of pupils from the school by parents.

The Municipal Chief Executive, Seth Oduro Boadu on Monday, August 30, 2021, joined by the Municipal Education Director, Mrs Eunice Amfo Akonnor, Mr Paul Mac Ofori, the deputy director, Shakil Mahamood Kpedau, Municipal Works Engineer, Matthias Eduah and some heads of departments within the Municipal Assembly as well as the PTA and Queen-mother of the community to hand over the site to Sterling FB construction Company.

The Municipal Chief Executive Seth Oduro Boadu told Starr News “we are putting up three classrooms and ancillary which are store, library, office, and six-seater toilet facilities. We are using our share of the District Performance Assessment Tool (DPAT) to fund the project. On paper, we are expecting to be completed by six months time but if the contractor can speed up it can be completed before the six months. We are still waiting for funds to come to add up. When the common fund comes we will use part to add the other three-unit,” He said.

Starr News Eastern Regional Correspondent Kojo Ansah visited the school and published on June 8, 2021, that, parents in Onyanfunso and other surrounding communities were withdrawing their children from the Onyanfunso M/A Basic School due to the perilous condition of the school’s buildings.

The school, constructed in 1962 with mud by the community has never seen any major renovation, thereby deteriorating to near collapse.

Although the classes start from kindergarten to class six, the classrooms are only three, therefore, classes are merged while those in the lower primary study in an Apostolic Church building.

Teachers at lower primary write on tables converted as teaching boards. The mud classroom blocks are near collapse with tattered and ripped-off roofs.

Academic work is disrupted whenever it rains.

One of the pupils lamented that “we stop learning whenever it rains, when the sun is high too we struggle because the roofs have been ripped off. Our books are soaked when it rains unexpectedly, we ran to the church to seek shelter. We return to class after the rains. it has rained today, look at my uniform. It is drenched we are lucky today is Friday. So we are pleading to the President, we respect him soo much so he should come to our aid.”

The Headteacher of the school Dzamasi Thomas said teaching and learning are always disrupted with fears that the rainy season will impede academics due to the condition of the school.

“Whenever it rains, we evacuate the kids to a church building here. We have to move all the kids to that place, which means you cannot continue teaching. It has been very tough for us. This rainy season if the situation remains the same then academic work will come to a halt. For we teachers we are doing our best, we encourage each other not to seek reposting that the situation will be better. But when we ask the parents to allow their children to attend school they berate us that we should bring our children to sit in the deathtrap of a school,” the Headteacher said.

He expressed fears the school may collapse if the situation remains unchanged considering the rate at which parents are withdrawing their children.