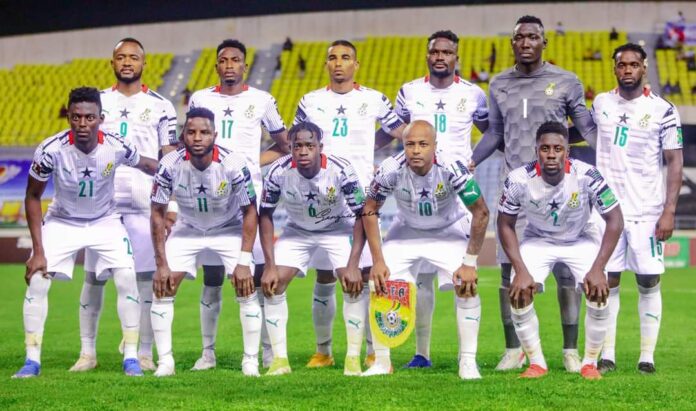 The Black Stars of Ghana will return to action on Monday 6th Sept to clash with South Africa at the FNB Stadium for their 2nd fixture of the 2022 World Cup Qualifiers.

Earlier on Friday, the Black Stars defeated Ethiopia by a lone goal scored by Mubarak Wakaso.

Even though the Black Stars got the maximum 3 points, they were everything but good.

The 4-4-2 formation initiated by Coach C.K.Akonnor was a disaster.
Against a less fancied Ethiopian side, the Black Stars struggled to even progress the ball from the defence to the midfield and then to the attacking third.
There was no fluidity in the transition of the ball.

Consequently, they had to rely on Mubarak Wakaso to be lofting the balls behind the Ethiopian defense hoping to locate any of the attackers but to no avail.

Also, with the 2 pivots in midfield; Baba Iddrisu and Mubarak Wakaso, this meant that the team had a lot of defensive minded players leaving only 4 to attack.

In attack, Jordan and Dede Ayew were all over the place!
I think, Coach C.K. Akonnor was not bold enough to drop some big name players who were surplus to requirement.
Jordan and Dede were clearly worn out as early as the 45th minute and should not have continued in the 2nd half.

The English Premier league clubs have reluctantly but unanimously agreed not to allow their players to feature in the World Cup Qualifiers in high risk covid 19 areas.

Many football fanatics have viewed this as a setback for the Black Starr, Personally I beg to differ.

I believe this will allow Coach C.K. Akonnor to select a solid team devoid of favouritism and bias.

Accra Great Olympics’ Samuel Abbey Quaye Quarshie and Bordeaux’s newly signed left back Gideon Mensah will be battling for the spot as Baba Rahman will be absent.
Currently, both players possess better qualities than Baba Rahman and have played more games than him.
They have blistering pace, effective defensively, dribbling abilities.

Skipper of Hearts of Oak, Fattawu Mohammed is in pole position to start against the Bafana Bafana,
Andrew Yiadom was abysmal in his role as the right full back.

The experienced and physically active right back must grab the chance to prove his worth as on paper he is a solid choice.

Ghana’s attack fielded against Ethiopia was very blunt and impotent,
Ghana has struggled to score in their past 5 games.

I think that the attacking options for the South Africa is promising.

With Jordan Ayew’s absence, Former Kotoko striker Kwame Opoku looks likely to start and should be flanked by Daniel Afriyie Barnieh and Yaw Yeboah who seem to be in the form of their lives.

Barnieh just helped Hearts to win their first league title since 2009, he also helped the Black Satellites to win the U-20 AFCON earlier in March this year.

Yaw Yeboah has also rediscovered his form with Wisla Krakow in Poland, he recently scored a Puskas worthy goal in club action.
He was the only player who showed true qualities of a Black Stars player against Ethiopia.

His hunger to succeed with the Black Stars has fuelled his impressive form so far.

This attack possesses confidence, pace, dribbling, energy to press and can marroon the Bafana Bafana defence.