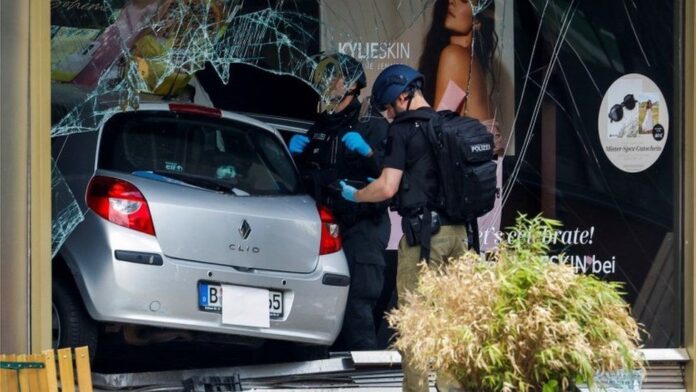 A teacher was killed and 14 schoolchildren were injured after a car hit a crowd on a busy street in the German capital, Berlin.

The group was on a school trip to Berlin from the state of Hesse. A second teacher was seriously hurt.

Police say the driver, a 29-year-old man, was arrested at the scene.

The incident occurred shortly before 10:30 (08:30 GMT) in the heart of western Berlin, on one of its busiest shopping streets.

The woman who died has been identified as a schoolteacher who was on a trip with a class of teenagers from the central state of Hesse. Berlin police say she died on the spot.

“There are seriously injured people among the more than a dozen injured,” police spokesperson Thilo Cablitz said.

Bad Arolsen Mayor Marko Lambion said a bus was on its way to pick up the children from Berlin. “We’re doing everything we can to bring them home,” he said at the press conference.

The driver has dual German and Armenian citizenship and lives in Berlin. Earlier reports that he had left a note in his car were denied by officials.

Witnesses described seeing a silver Renault Clio veering into a crowd of people on the pavement near Berlin’s busy Kurfürstendamm shopping avenue, before driving back on to the road and crashing into a shop window.

A witness who would only be named as F Kacan said the driver had abandoned the car and had taken off running but “we were able to stop him”, AFP news agency reports.

The actor John Barrowman tweeted that he had been nearby when the incident took place and in a video posted from the scene said the car had repeatedly mounted the footpath before crashing into the storefront.

Barrowman told the BBC the car had careened through tables of people sitting outside having breakfast, before smashing into the storefront.

Some 130 emergency workers went to the scene and a body lay in the middle of the road, covered in blankets.

It happened opposite Breitscheidplatz, where 12 people were killed in a terrorist attack in 2016 when a truck was deliberately driven into a crowd of people at a Christmas market.

Berlin Mayor Franziska Giffey said it was too early to know if the area had been chosen deliberately, but she said: “It’s a situation where you think, for God’s sake, not again!”

After the Christmas market attack in 2016, the militant group Islamic State (IS) said it was behind the killings which had been carried out by an unsuccessful asylum seeker. He was later shot dead by police in Italy.