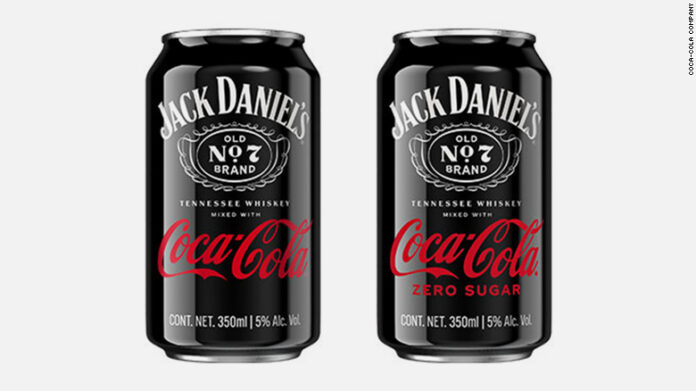 Drinking a Jack and Coke is about to become, somehow, even easier.

Coca-Cola is partnering with Brown-Forman to make a new canned cocktail combining Coke and Jack Daniel’s Tennessee Whiskey. The drink, which also will be available in a zero-sugar option, is hitting shelves in Mexico later this year before expanding globally.
The combination brings together “two of the world’s most recognizable and valuable trademarks,” the companies said in a press release and will include “clear responsibility symbols” to indicate the beverage is for legal-aged drinkers. It will typically have 5% alcohol by volume, but that will vary depending on the country.
Brown‑Forman CEO Lawson Whiting said that the partnership “brings together two classic American icons to deliver consumers a taste experience they love in a way that is consistent, convenient, and portable.” He added that the new drink will “accelerate expansion and continue to grow our business around the world.”
Mexico was picked as a launch market because both brands are popular there and the country has a well-developed ready-to-drink market, a Brown-Forman spokesperson told CNN Business. A US launch is intended for some time in 2023.
Coca-Cola (KO) has been aggressively expanding its alcoholic drink options as the trend grows. Jack and Coke joins Topo Chico Hard Seltzer and Simply Spiked Lemonade, both made in partnership with MolsonCoors (TAP). The company is also scheduled to launch Fresca Mixed later this year, a spirit-based cocktail created in conjunction with Corona brewer Constellation Brands (STZ).
Sales of canned cocktails have exploded as drinkers look for convenience and new flavors beyond wine and beer. The beverage category grew 53% last year and is projected to grow another 29% over the next three years, according to data from IWSR Drinks Analysis.
Punchier flavours and drinks from recognizable brand names might also help companies break through in the quickly growing sector. Brown‑Forman (BFA) said in a recent earnings release that Jack Daniels is experiencing a “resurgence” in sales and the company has plans to grow the whiskey, even more, this year.
Meanwhile, rival Pepsi (PEP) is also eying the trend: HARD MTN DEW, a sugar-free canned cocktail with 5% alcohol by volume, hit shelves a few months ago.