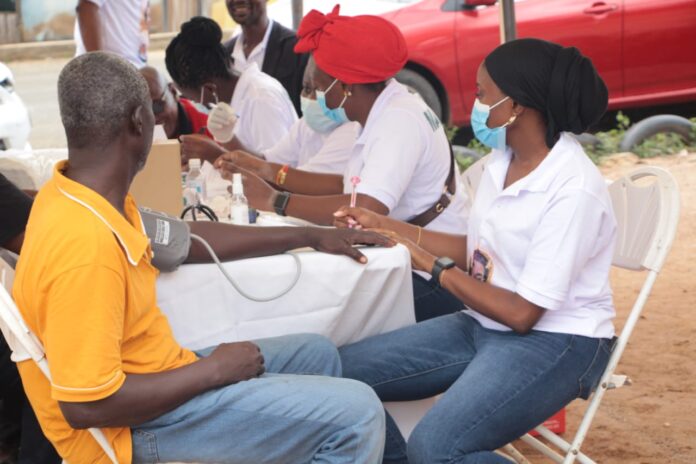 Health experts have raised concerns over the prevalence of high blood pressure and diabetes among residents in Koforidua Zongo.

The situation has been attributed to a shift in healthy eating and regular physical exercises in form of walking  which was characteristic of Muslims in Zongo communities.

The health screening saw some Medical Doctors and other clinicians from Ridge Hospital in Accra and Koforidua deliver quality healthcare to the residents.

Participants were screened on high blood pressure, Malaria, typhoid, Covid-19, glucose among others.

Hypertension and diabetes were identified to be prevalent among the populace.

The medical team dispensed medications for the patients and referred others with severe to critical conditions to the hospital for further treatment.

Dr Fati Ahmed, a medical doctor at Ridge Hospital in Accra who led the medical team was worried that some hypertensive and diabetic patients had blatantly defaulted their medications.

“We have a lot of people with hypertension and diabetes. There are a lot of people who are known diabetic and hypertensive who are none complaint. They are not taking their medications, some people have gone to the hospital before but they’ve been told, given medication for a month instead of them to go for follow ups and review, they did not go.So we have representative from Ghana Health Service and Nurses who will make sure they do follow ups .We have provided first aid for those with very high Bp as well and referred a couple of them to the hospital ,and those who had to go immediately because their Bps and Sugars were very high,” she said.

Moro Mamunatu public health nurse at Health Center at Koforidua zongo said the facility will monitor residents diagnosed of High blood pressure and diabetes to ensure they take their medications.

She is worried that many residents of the Zongo community are reluctant to go to hospital for checkups .

She said similar exercises including free registration onto the National Health Insurance Scheme will be held in other zongo communities in parts of the Eastern region including Kibi , Asamankese .

Some of the beneficiaries hailed the medical intervention.