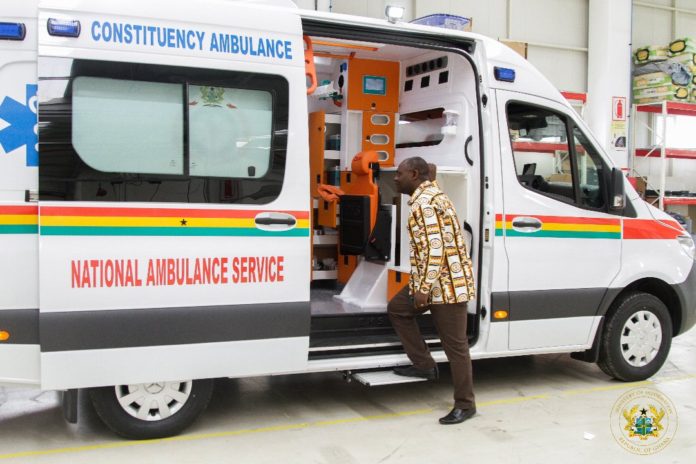 Emergency Medical Services are an integral part of any efficient health system. They are a lifeline as their inefficiency can drive a population’s high mortality. Research suggests that 90% of global injuries occur in lower-middle-income countries. Some of the reasons for this skewed distribution include poor road conditions, lack of public awareness of the importance of road safety, and the lack of ability to provide first aid to the victims during accidents.

In Ghana, other factors include industrial accidents due to poor compliance with health and safety regulations, a doubling of the country’s disease burden due to an overlay of poorly and sometimes undiagnosed chronic diseases over existing infectious diseases leading to avoidable strokes and other cardiovascular incidents and a lack of well-resourced accident and emergency centres have also been mentioned.

Despite all these, there seems to be a failure to address the inadequate resourcing of the National Ambulance Service (NAS), the organisation mandated to be the mainstay of prehospital care. This situation has led to needless mortalities and, on occasion, fierce debates amongst Ghanaians when deaths have occurred. Predictably, these debates have been laced with political innuendo and name-calling. However, they have done little to stop the needless deaths.

Though political will has a role to play in fixing Ghana’s NAS, I believe that a lasting solution will never be found if we do not begin to devolve politics from the running of this organisation. I hold this view because back in 2018 when the government indicated that it was fulfilling its manifesto promise of providing an ambulance for each district, it was clear that there was no long-term plan post-inauguration to ensure that the main ingredients would make citizens benefit from these lifesavers were provided.

To start with, no budget since 2018 or even before has made specific provisions for running these ambulances, let alone the NAS. A look at our current health expenditure per capita (HEPC) of US$75 points to the fact that even at the height of COVID-19, the government’s contribution was less than 40% (US$30.29) with citizens paying over 50% (US$36.22) privately as out of pocket expenditure with the remainder being funded by development partners (US$8.49).

It must be emphasised that over 76% of the government’s contribution to HEPC is already committed to the salaries and emoluments of health workers, with a further 19% dedicated to running costs of health facilities. This leaves 5% (approximately US$1.51 or GHC12.28) per person per year, out of which funds are committed to NAS. Even if all that remains were to be committed to prehospital emergency care, this would be wholly inadequate to resource this organisation. If this is no indication that our government has never prioritised the word “emergency” regarding health, someone tells me what is. If it doesn’t clear the misconception that there was a strategic plan for these ambulances, someone tells me what does.

This background drives the NAS to demand a fuel premium before transporting a patient in an emergency. Unfortunately, most Ghanaians have an adhoc spending approach when it comes to health and may not have cash available to pay the GHC600 required to fuel the ambulance in times of emergency. Even if they did, the charge they are expected to pay as a one-off is approximately 50 times more than what the government can commit yearly towards the NAS and approximately equal to the current HEPC. This is untenable and is why Parliament is investigating the passing of a pregnant lady.

However, I must state that without the financial commitment, infrastructure provision and adequate upskilling of emergency medical teams, the outcome of this Parliamentary probe will only be fodder for public commentary and will not prevent further deaths under similar circumstances. Listening to the Chief Executive of the NAS give his evidence in chief to the committee, I could feel a sense of haplessness in his delivery. Here was a man running a woefully under-resourced institution, being questioned by the representatives of the citizens who approve the NAS resources but are playing ostrich as though they have no idea he has been handed a poisoned chalice.

Based on the differential splits in HEPC, I suggest that the public would have to partner government in funding the NAS by meeting it halfway. The indicative cost per person should be calculated based on the average yearly cost of running the organization. This must be independently verified and stripped of all waste. The price would have to factor in wear and tear due to poor roads and a replacement time frame for the existing ambulances. It would also have to envisage how to augment their numbers and the number of paramedics as a minimum.

Contributions from citizens toward the NAS must not be seen as a tax but as a form of insurance that will eliminate the need for upfront payments when patients may lack the consciousness or ability to save themselves. The funds must be managed such that a portion could be invested to generate additional revenue for prehospital care in an emergency.

I propose a separate fund with trustees that routes contributions away from the consolidated fund must be created with the necessary legal backing to ensure its autonomy. This would ensure that an overzealous Finance Minister doesn’t try collateralising the revenues or delay its release for the efficient running of the NAS. Should we allow that to happen, the vicious cycle will not be broken?

In return, the NAS must be given key performance indicators (KPI) that measure their mean response times and clinical outcomes, such as patient survival rates as a minimum. These KPIs should be publicly available, and the organisation’s leadership evaluated based on these measures. This will remove the blame game and anger directed towards NAS leadership and staff when their under-resourcing makes it impossible for them to render a service or save a life.

With the level of recklessness in our society, we cannot continue to play Russian roulette with our health. A simple look at recent happens indicates that irrespective of one’s social standing, our emergency health failure can result in death. We have seen it happen to a sitting leader, a former Vice President, statesmen, wealthy businessmen and have-nots. Is this not enough reason that the time to collectively prioritise the word “emergency” in emergency services is now? If that is not the case, I can’t help but ask, what more will it take for us to agree we are all at risk?