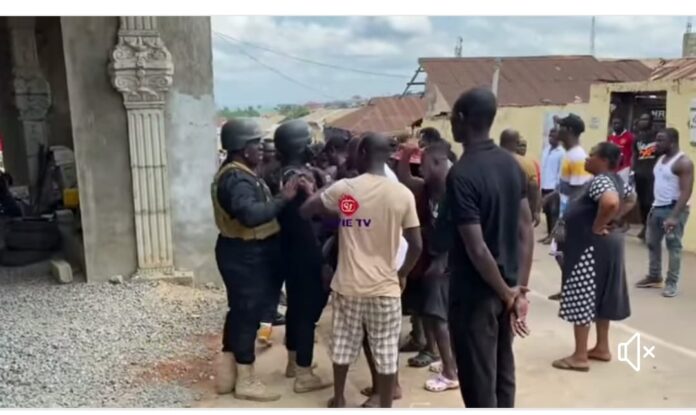 There is confusion at Akropong Akuapem in the Eastern region. Reports indicate one person has sustained a gunshot injury.

The Baamuhene of Akropong Nana Afari Bampoe and his traditional army stormed the venue amid gunshots to disrupt and stop the activity leading to a violent confrontation.

Armed Police rushed to the scene to maintain law and order. The victim who reportedly sustained gunshot wounds has been rushed to the Eastern Regional Hospital.

Meanwhile, there is still tension in the traditional area as some group of men have besieged the premises of the Baamuhene for attempted revenge but the Police are in control of the situation.

Akuapem traditional Council performed “Adaebutuw” on August 3, 2022, banning all forms of noise-making activities including drumming, funeral, burial, and mourning for six weeks ahead of the Odwira festival to be celebrated on 12th September to 18th September 2022.

According to Otoobuor Djan Kwasi II who is Adontenhene for Okuapeman, the decision is to avoid escalation of tension and conflict in the traditional area owing to a petition by the Queen-mother of Okuapeman, Nana Obuor Nketia pending before the national House of Chiefs challenging the legitimacy of Okuapehene Oseadeeyo Kwasi Akuffo III.

“Now that the matter has not been determined we have to ensure there is no conflict in Okuapeman. We the divisional chiefs don’t have any problem with the Chief (embattled Okuapehene) it is rather the Asona family. I am Aduana, I can’t be Okuapehene because I am not Asona. Now because he is not the one who presides over traditional council meetings so if you are not presiding over council meetings which power will you use to celebrate the Odwira festival? So their press releases have indicated clearly how the Odwira should be celebrated stating that the durbar on Friday and the carrying of Chief in palanquin have been cancelled so has Otoobuor’s decision been turned down or upheld? Who say man no dey …Man dey !! “, Aburihene said.

Otoobuor Djan Kwasi refuted the claim that he dislikes Okuapehene.

“Everyone is aware of what has happened in Okuapeman. I am not the one saying it. I don’t belong to the Asona Clan. I can’t be Okuapehene neither I am an Akyem to be Okuapehene. I am Adontenhene and Aburihene which I am content with. I don’t envy anyone but we are speaking about customs and traditions. We all love our chief (Okuapehene). However, what has happened (litigation ) is not between him and Adontenhene. It is rather between him and his own grandmother Okuapehemaa. It is the Okuapehemaa who nominates Okuapehene so if there is a disagreement between them, those of us around should help foster peace and unity than to accuse me of supporting a party in the case.I have said but let me emphasize that it is Queen-mother who enstools a chief !! ” Aburihene said.

Aburihene continued “After the demise of Oseadeeyo Addo Dankwa ,all minutes of meetings attended by Sakyiabea family are with me .The name that popped up to enstooled is Odehye Kwasi Akuffo the current Okuapehene.So what again. so as acting President of Akuapem traditional council with all these records what again? but it is a case that has been filed at Regional House of Chiefs which I am not President there. Now the case is at National House of Chiefs which I am not President there too ,so we are waiting for their ruling so if the ruling affirms Okuapehene’s legitimacy, I will call a traditional Council meeting and hand over all his powers to him”

He told the media that, the celebration of the Odwira festival is inevitable therefore it cannot be cancelled or banned however can be adjusted during pandemics, and litigation among others.

He, therefore, emphasized that the 2022 Odwira festival is coming off as planned but there will not be durbar and carrying of chiefs.

“I have not heard this strange statement before that Odwira has been cancelled. Odwira cannot be cancelled because it is part of our tradition and custom.It can be adjusted to suit situations like pandemic, when a chief is dead or there is litigation on that note somethings like durbar or carrying chiefs may not be done. Odwira is not only for the chiefs every stool that celebrates Odwira observes it. Odwira is a significant festival” the Okyenhene Ankobeahene said.