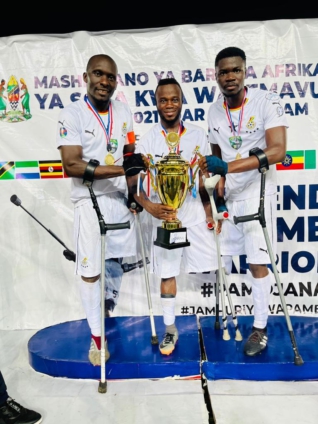 Ghana’s Amputee team missed out on England tri-nation in July due to UK visa delays and may not make it to the 3rd and 4th September pre-world cup friendlies against the English amputee football team.

Ghana was scheduled to play England and Poland in pre-world cup-friendly games between 29th and 31st July at the Reaseheath College Park, Cheshire. Still, for visa processing delays, the team was denied the opportunity.

The amputee national team nicknamed the Black Challenge were not at the event because their passports were still at the British High Commission when the competition kicked off.

It has been over seven weeks since the applications were submitted. All attempts made by the governance agencies, Ghana Paralympic Committee and the Ministry of Youth and Sports remain unattended to.

Foreign-based players, coaching staff, officials and journalists are left disappointed as they have no idea when their passports will be released as the new date for a test game with the English amputee football this weekend draws near.

Many of the national amputee team players ply their trade in Turkey. Sadly, they cannot rejoin their respective clubs for pre-season training because their passports are still at the British High Commission, having submitted their UK Visa application on July 16, 2022.

On March 29 2011, Asamoah Gyan’s injury-time equaliser deprived England of victory in a highly entertaining friendly against Ghana at Wembley.

It is of this same feeling that Ghana’s amputee believes the British High Commissioner and The UK Visas and Immigration should make disability sports development and promotion a priority due to the country’s ‘home of football’ tag.

Ghana are the champions in Africa after beating Liberia in the Amputee Cup of African Nations finals.