Vice President of IMANI Africa, Bright Simons is strongly convinced there is a high possibility of complicity on the part of the National Identification Authority(NIA) in relation to the Ghana card acquisition by galamsey queen, Aisha Huang.

“Frankly, the more the National Identification Authority (NIA) of Ghana tries to wiggle out of this “Aisha Huang”/”Galsmsey Queen” debacle, the more ridiculous they sound,” Bright Simons tweeted on Friday.

1/
Frankly, the more the National Identification Authority (NIA) of Ghana tries to wiggle out of this “Aisha Huang”/”Galsmsey Queen” debacle, the more ridiculous they sound. 😏 In which serious country can someone with “adverse immigration history” be granted a RESIDENT CARD???

The NIA has said the Chinese national has a non-citizen Ghana card with the name Huang En and not Aisha Huang.

Speaking at a press conference in Accra, the Executive Secretary of the NIA, Prof. Ken Attafuah noted that the Ghana Immigration Service had not returned Aisha’s card to his outfit upon her deportation hence it could not be blamed for Huang’s continuous possession of her non-citizen Ghana card.

But Bright Simons contends the question that remains unanswered in the case is how someone with “adverse immigration history” is granted a resident card by authorities.

“And this is not someone with just adverse immigration history but according to the government subject to a deportation order! he added.

In court, on Friday, September 16, 2022, while presenting the brief facts of the case on Aisha Huang’s latest charges, Mercy Arthur, a Principal State Attorney told the court that, Aisha Huang’s stay permit was revoked four years ago.

“On 19th December 2018, the Attorney-General entered nolle prosequi and terminated the trial,” the Principal State Attorney told the court.

“Consequently, she was put on Ethiopian Airlines Flight No. Et 920, which took off at about 12:50 pm on 19h December 2018 to Addis-Ababa, Ethiopia, en route to Guangzhou-China.”

Mercy Arthur told the court presided over by Her Ladyship Justice Lydia Osei Marfo that, Aisha Huang “sat on seat No.32 F(Economy Class) and her travel documents handed to the captain of the flight to be handed to her at her final destination, Guangzhou China.” 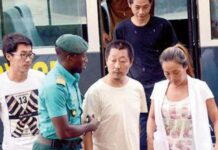 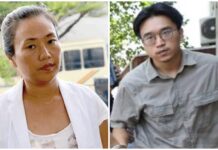 Aisha Huang’s son to reappear in court on Monday