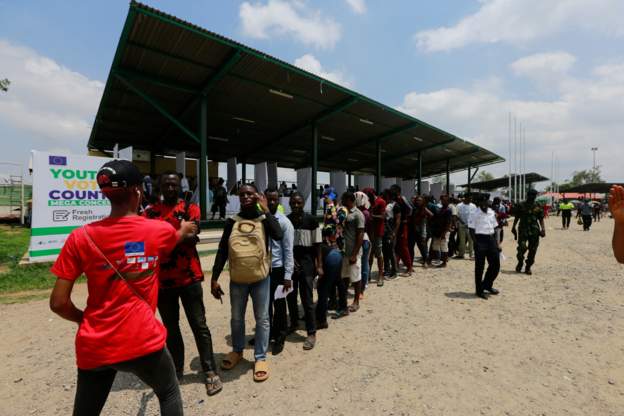 Nigeria’s electoral commission says it has delisted more than a million newly registered voters after a verification process and ”cleaning up” its voters’ register.

Those affected had registered between June last year and January this year in order to acquire permanent voters’ cards (PVCs).

The Independent National Electoral Commission (Inec) says during that period 2,523,458 people registered but records of 1,126,359 registrants were discovered to be ”invalid and subsequently delisted”.

This means nearly half of the registrations were invalid.

According to the commission, ”double, multiple and ineligible registrants” were detected.

It explained that it was using an automated biometric identification system in verifying the voter register.

This massive invalidation is likely to cause anxiety among would-be voters.

But the commission says at the end of the process, the register will be published for “scrutiny, claims and objections by citizens”.

It says this process is crucial for credible elections.

The West African country is due to hold general elections in February next year to choose a successor to President Muhammadu Buhari.