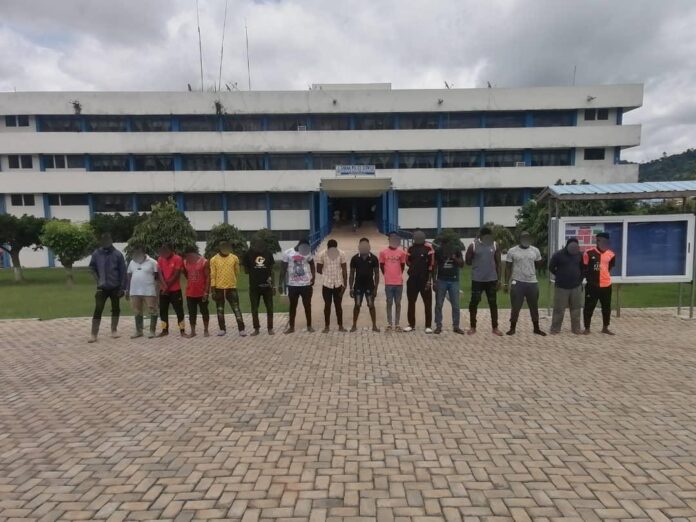 Police have confirmed the arrest of sixteen persons in connection with a shooting incident at Asaman Tamfoe in the Eastern Region.

The incident occurred between some persons believed to be illegal miners and a community anti-galamsey taskforce on 29th September, 2022.

A statement issued by the Police said one pump action gun, two excavators, two water pumps, and a battery were retrieved.

“Efforts are underway to arrest the remaining suspects and retrieve any other weapons in their possession.

“The Police have also seen a viral video on the incident which is being reviewed as part of the investigation,” police said.

The Chief of Kyebi-Apapam Osabarima Apagya Ofori IV and others have been injured in a violent clash during anti-galamsey operation at Asamang Tamfoe in the Atiwa East District in the Eastern region Thursday, September 30, 2022.

The Chief was struck in the head by a flying stone and was rushed to Kibi Government Hospital where he was treated and discharged.

The joint operation team managed to arrest 24 suspected illegal miners.
However, others managed to escape.

Some of the illegal miners blocked the road to prevent the team from moving out of the community with the excavator and other equipment seized.

The violent resistance led to firing of warning shots as the rampaging youth hurl stones and other dangerous implements.

Some vehicles were smashed whiles others including the Chief of Kyebi Apapam sustained injury.

After being discharged from the hospital, Osabarima Apagya Ofori IV told the media that, the illegal miners in the community have resisted and attacked the Okyeman Environmental taskforce after many attempts.

He decided to collaborate with the Police to clamp down on them to protect the environment from the scourge of galamsey.