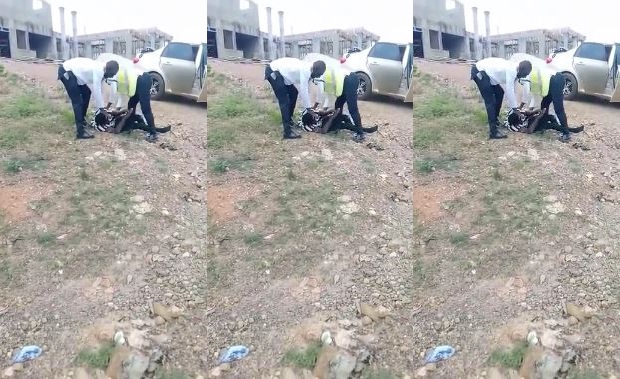 Two officers of the police MTTD have been captured in a video physically assaulting a male suspect to a pulp at Asankrangwa in the Western North region over a bag they suspected contained marijuana (weed).

The suspect was said to be in the company of another man at the back of a Pragya tricycle which was stopped at Asankrangwa Newtown, between Asankrangwa and Asankran-Odumasi.

The Asankrangwa Divisional Police Command MTTD personnel enquired about the owner of a bag at the back of the Pragya.

Though the suspect was hastily deemed to be the owner, he vehemently denied ownership but was brutalized by the men in uniform while some residents watched on and rather blamed the suspect for not admitting the allegation and plead to be set free.

The tricycle rider and the passenger were allowed to go free.

The incident happened on Saturday, 19th November 2022 around 11am. The Pragya rider was stopped by one Inspector Prince Awuah and another.