The Paramount Chief of the Edina traditional area, Nana Kwadwo Conduah VI, has threatened to close down the Elmina castle by Friday, January 27, if authorities do not pay the appropriate royalties to the traditional Council.

Though the historical edifice is situated on the lands of the Edina traditional area, the chief explains the Museums and Monuments board has failed to pay them 20% of the proceeds since 2009, as directed by  law.

The authorities, he added, have failed to support the traditional council in developing the town, despite the huge patronage that the facility receives.

Speaking on a local radio station in Elmina, the enraged chief declared that nothing will stop him from closing down the castle as authorities have failed to honour earlier promises. 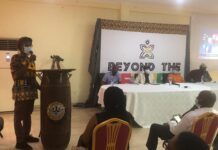