The Akyem Agyapomaa Methodist Primary School in the East Akyem Municipality of the Eastern region is sitting on a time bomb.

The dilapidated school building, according to experts, could cave in anytime soon, breeding fears among pupils and teachers of the facility.

The fear of the school authorities has heightened following the collapse of a kindergarten school building in Breman Gyambra in the Asikuma-Odoben-Brakwa District of the Central region last week, killing six pupils in the process.

The Agyapomaa Methodist Primary School which accommodates about 160 pupils, according to authorities, needs urgent rehabilitation or must be razed down for a new one.

Some of its roof are hanging while others have ripped off with cracks visibly showing on the walls as the wooden pillars holding the entire structure wobble.

Erosion is gradually eating up the foundation of the building, making it more unsafe.

The Headmaster of the School, Jonas Kofi Ametepe, told Starr News, the condition of the school building is a serious threat to teachers and pupils.

He is appealing to the government to come to their aid to avert another tragedy. He said the current situation of the school and the lack of teachers’ bungalow as well as washroom facilities are impeding delivery of quality education.

Mr. Ametepe revealed the school closes early anytime it threatens to rain “due to the poor state of the building to prevent disaster.”

Ghana Education Service authorities were unavailable to comment on the situation at the time of filing this report. 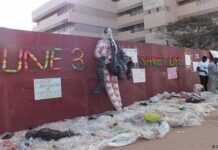 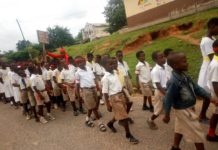