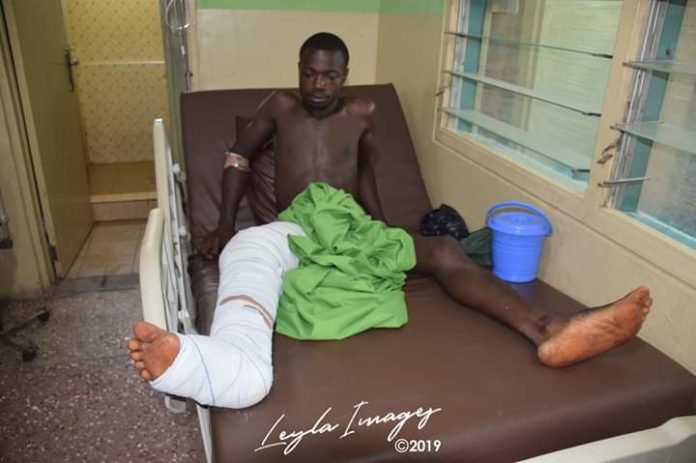 A final Year Junior High School student is among seven persons who suffered gunshot wounds during a spontaneous protest Wednesday.

The student, Ruth Makathar, 18, preparing to write the June 10, 2019 Basic Education Certificate Examination (BECE) was shot in both legs with a stray bullet after she was caught up in the Police clashes with the agitating power consumers when returning from market.

The Specialist Surgeon and Medical Director at St. Martins De-Porres Hospital in Agomanya, Dr. Stephen Kusi briefing the Eastern Regional Security Council explained that the student and one other injured were resuscitated and stabilized since they were in critical condition adding they have been referred to the St. Joseph Orthopaedic Hospital in Koforidua for further treatment on their fractured bones.

According to the Medical Director, seven persons including a Police officer whose gun accidentally discharged shooting his foot were rushed to the Hospital on the fateful day of the violent clashes.

He said four of the injured have since been discharged.

Body of the 23-year-old mentally challenged killed by bullet discharged by the Police has been deposited at the morgue.

Meanwhile the Eastern Regional Minister, Eric Kwakye Darfuor has charged the Lower Manya Municipal Assembly to foot the bills of the patients.

The Member of Parliament for Lower Manya Krobo, Ebenezer Okletey TerLabi also visited the injured at the Hospital as well as the bereaved family to Commiserate with them .

The MP was accompanied by the some Regional executives of the opposition National Democratic Congress, William Atamudzi and Hackman Kabore both Vice chairman and Regional Organizer respectively.

Angry youth of Kpongunor organized a spontaneous protest to petition the Municipal Chief Executive for the Area, Kwaku Simon Tetteh, on their concerns on over billing by PDS and its ongoing mass disconnection exercise.

The youth had earlier on Wednesday morning mounted road blocks and pelted the PDS Staff with stones and sticks at Yohe, a community near Odumase Krobo when PDS staff went to the community to discontinue its mass disconnection exercise.

The irate youth smashed a PDS Nissan Pick Up with Registration Number GV 2318-1. It took the intervention of armed Police personnel to rescue the PDS staff.

The PDS staff decided to switch off the transformer cutting off power supply to the entire area.

Shortly after the attack, the angry youth mobilized to embark on a protest to petition the MCE but the armed Police rushed to protect the Municipal Assembly Office by preventing the youth from entering the premises.

This led to clashes between the youth and the Police. Many warnings shots have been fired to disperse the youth who are also attacking the Police with stones and other implements.

Thirty-five(35) persons were arrested in during the riot.

Reports indicated that the Police reinforcement team fired tear gas after they were attacked by the youth.

PDS is embarking on a mass disconnection exercise with armed Police personnel in Somanya, Odumase Krobo and its environs.

The exercise dubbed “Revenue Mobilization” according to Somanya District Manager of PDS Ing. Edward Ochire, has become necessary due to the failure by many residents to pay their electricity bills since 2017. A situation he said has led to revenue shortfalls of the company.

Hundreds of houses have been disconnected in the ongoing exercise which started May 13, 2019 from Kpong and Nuaso communities.

One person was put behind bars for attempting to resist disconnection of his house. Since the exercise began, many of the affected residents have been trooping to the offices of PDS to pay their accumulated bills ranging between Ghc3, 000 and Ghc 20,000

There has been long standing feud between residents and workers of ECG now PDS .In 2017, angry residents in Somanya attacked PDS office for over billing.

Police vehicles were torched and properties destroyed in the violent attacks. Many residents have since refused to pay electricity bills and have threatened to attack PDS staff who attempt disconnecting their homes.