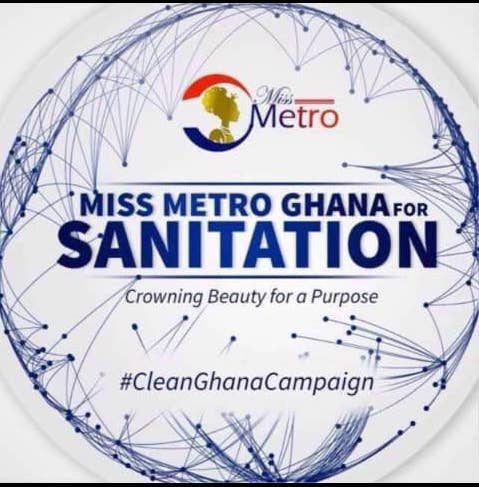 The Journey of a thousand miles, they say begins with a step. The first step of every journey becomes the bedrock for either success or failure, but for the Miss Metro Ghana, the first step that was taken in 2017 has been a huge success as many of its queens receiving appointment to occupy various ambassadorial positions.

This is how the journey began.

Decades before and after independence, Ghana’s journey to a self-reliant country in all aspect of the life began with many citizens proposing one thing or the other. The one thing that many failed to foresee and to propose solutions to was the issue of population growth and it attending consequences.

The steady or as some will say the “rapid” growth of Ghana’s population has brought on, many good and bad effects, with filth emerging on the top chart of negative effects of growth. Many governments, past and present have spent millions of dollars in trying to find a lasting solution to the age old problem of poor insanitary conditions.   Over the years, children below the ages of five (5) have died in their thousands due to diseases related to filth.

Ghana has achieved many success stories right from the Millennium Development Goals (MDGs) to the Sustainable Development Goals (SDGs). Some of the country’s achievements includes access to education, access to health, availability of infrastructural projects, and creation of jobs among others. Unfortunately same cannot be said of the SGD 6 which clearly stipulates that all UN member nations must ensure access to clean drinking water and good sanitation.

According to reports, Ghana spends nearly $290 million yearly on poor sanitation. In a nation where resources are scares and successive governments struggle to distribute fairly to all sectors of the nation, it is quiet unacceptable to continuously spend over 1.2 percent of GDP on a problem that could easily be avoided if people where to try a little harder to take the first step by changing  their attitudes towards the environment.

The Miss Metro Ghana pageant sort to change the perception of people regarding sanitation in general, educate and to empower young talented women who are ready to put themselves to the task by tackling insanitary conditions in their communities. This is what the Miss Metro Foundation has been doing since 2019 and two years down the lane, the success stories has been overwhelming.

Queen Lucky Adeline Aanomah was the winner of 2017 Miss Metro Tamale. Queen Lucky was appointed a fellow of the 2019 Ford Community Impact Fellow due to the hard work, commitment and dedication she put in her various community projects towards ending open defecation in the Northern Region. Her appointment awarded her the opportunity to join other young fellows from around the world to participate in the Ford Community Impact Fellowship, in the United States of America. During her stay in the United State, Queen Lucky shared with other fellows her journey with the Miss Metro Ghana pageant and how her participation in the pageant has helped her change the lives of many people in her region especially the children, who would have hitherto been victims of poor sanitation.

Queen Scholastica Tiwaah Nsiah was the winner of 2018 Miss Metro Kumasi. Queen Tiwaah was appointed United Nations Youth Ghana Sanitation Ambassador in August 2019. Kick starting her own foundation after winning the pageant, Queen Tiwaah has been embarking on various tours in her region, educating young people on the numerous socio-economic benefits of good sanitation. Her “Catch them young for a cleaner Ghana” campaign a personally funded project which seeks to involve children in the sensitization and practice of good hygiene, caught the attention of the UN Youth Ghana hence her appointment as a Sanitation Ambassador. She has since participated in the Ghana International Model United Nations Congress and other workshops. She was also awarded a two year contract.

The 2017 Sekondi-Takoradi Miss Metro Queen, Paulina Arthur was recently appointed Lydia Contraceptive Ambassador, other queens have had the chance to further their education after receiving educational scholarships from the Mayor of the Kumasi Metropolitan Assembly, Hon Assibey Antwi.

Many contestants of the Miss Metro Pageant identify with the problems associated with poor sanitation, as such are desperately looking for the opportunity to make things better for themselves and their communities and the nation at large, but most importantly they want to become the voice of the many children whose childhood joy were stolen from them by preventable diseases such as diarrhea, malaria, cholera among others.

As grand finale of the 2019 Miss Metro Ghana pageant slated for 29 September 2019 in Kumasi, organizers are very optimistic that the winning queens will continue on in the path that has been set by their predecessors and work even harder to achieve the ultimate goal which is reducing filth related practices to the lowest if not eradicating it entirely.