An official of the Fire Service has been admitted at a health facility in Accra after he ‘almost passed out’ while battling the fire that gutted the GRA office at Circle Sunday.

“He almost collapsed so he was rushed to the hospital,” the  Nima district Police Commander ACP Abraham Quartey told Starr News’ Ibrahim Alhassan.

He also revealed two safes of the GRA were salvaged by the men fighting the fire.

Eyewitnesses say thick black smoke began to fill the clear skies around 9:00 am before the raging flames became visible.

Reports suggest the Archives Department of the GRA was the first to be attacked by the fire. 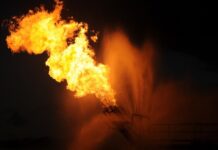 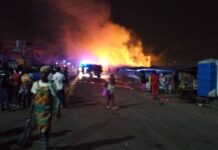