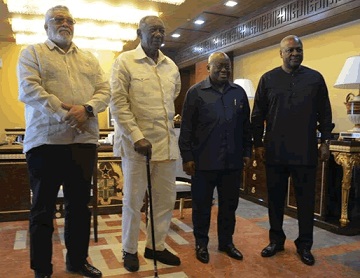 “I have spoken to our flagbearer and he says that what they discussed was electing MMDCEs for which there is a broad-based consensus. There was no commitment towards article 55(3) amendment and introducing partisan politics at the local level, there was no such consensus.

“Fellow Ghanaians, it is of deep regret that I have given instructions to the minister for local government and Rural development who will spearhead the process with commendable vigour and dynamism on behalf of the government to abort the process and see to the withdrawal of the bills for the amendment of the constitution both in respect of article 24 (31) and Article 52 (2),” he said.

The NDC had always campaigned on a NO vote and Mr Ablakwa in a Facebook also congratulated the NDC for their position.

Mr Ablakwa has also called on the government to disclose how much was spent on the aborted December 17 referendum.

“As transparency and accountability demands: can Government now disclose how much it has spent on this abortive referendum thus far; and steps being taken to prevent any more financial loss to the state, especially as we are aware printing of ballot papers and other ancillary expenditures had long commenced,” Mr Ablakwa wrote in a Facebook post.