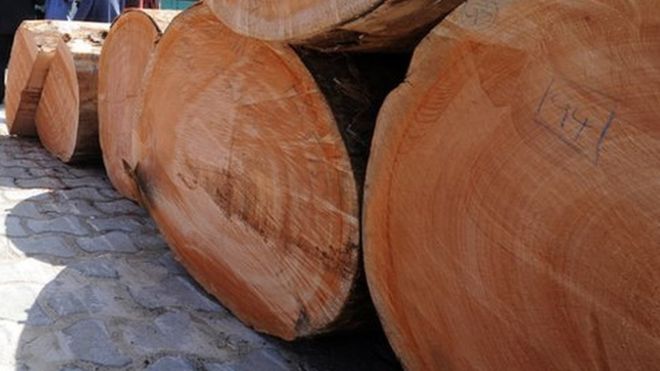 Ghana’s Ministry of Lands and Natural Resources has directed its Forestry Directorate to work out tougher measures against illegal transportation of rosewood through any routes in the country.

The directive comes after an investigation conducted by Washington-DC-based Environmental Investigation Agency (EIA) had revealed that the in-demand raw material was illegally being shipped from Ghana to Asia despite a ban in the country.

Published online, the investigative piece was captioned “BAN-boozled: How Corruption and Collusion fuel Illegal Rosewood Trade in Ghana”. The Minister for Lands and Natural Resources, Kwaku Asomah-Cheremeh, delivered the instruction in a press statement Friday in Accra.

“I wish to direct that the ban on rosewood harvesting, transport, processing and export announced in March, 2019, remains in force indefinitely. I hereby direct the Forestry Directorate of this Ministry to liaise closely with the Forestry Commission to develop modalities to enhance the monitoring mechanism within the various hotspot rosewood districts. The Municipal, Metropolitan and District Assemblies (MMDAs) are directed to collaborate with other relevant state agencies to ensure that rosewood is not transported through any routes from the districts.

“To enhance the general outlook of the rosewood trade, I wish to advise all interested parties including the local and international media to focus attention on the consumer countries (largely China and Vietnam) who import illegal timber from Ghana. Attention should also be on companies which forge documentation to cover wood exports (especially rosewood) to Vietnam. These companies should be named and shamed,” he affirmed.

The minister added: “In the interim, all lying logs of rosewood would be evacuated to central locations across the hotspots and auctioned to the general public for value added processing.”

Government had instituted a Committee of Inquiry in August, 2019, to investigate allegations of corruption in rosewood trade in Ghana after the EIA’s report.

A delayed release of the committee’s report had provoked some public concerns with the Member of Parliament (MP) for Builsa South, Dr. Clement Apaak, and some concerned citizens redoubling their calls on government to make the report public.

The report was eventually released just one-week after another investigative report— “Ghana and the Rosewood Curse”— by an internationally known Ghanaian journalist, Emmanuel K. Dogbevi, was published on several news sites across the globe and widely circulated on social media handles.

“I am aware that several individuals, the media/press and civil society organisations are very eager to see the report and the findings of the committee and the response of the minister in respect of the way forward. The committee was initially tasked to carry out the exercise within five weeks but had to extend the period to eight weeks due to the extensive field verification visits they undertook,” the minister explained at the press briefing.

Clearing the air further, he stated: “Due to the serious nature of the allegations raised by the EIA, the committee’s investigation encompassed the entire value chain of the species. Through field visits to the hotspots of rosewood exploitation, the committee sampled grass-root opinions of communities along with interviews with the respective district assemblies. I am, therefore, happy to present to you the highlights of what we have all been waiting to hear for some time now.”

Findings by the Committee of Inquiry

Sharing the highlights of the report, the minister said the committee did not find any evidence of wrongdoing involving any government official with respect to the EIA’s story.

“I am glad to state that the committee did not have adequate evidence to establish corruption cases against any officials of government. However, the field investigations revealed that there are several institutional weaknesses and lapses in the rosewood trade— from the community level to the ports of exit. This is due largely to the highly informal nature of its trade, which is composed of communities who informally harvest the timber for sale to agents, who then aggregate for sale to rosewood traders and who in turn resell to the buyers (mostly Chinese).

“Several impounded truckloads of rosewood, which had no documentation to salvage or transport rosewood, had managed to evade several checkpoints including the Police, National Security and District BNI officials, and had only been arrested at points very close to the harbour. Data capture of rosewood exports at the port was questionable as TIDD statistics of exports largely did not conform [to] GRA Customs Export data capture,” noted Mr. Asomah-Cheremeh.

He also described the six million (6,000,000) rosewood trees said to have been harvested in Ghana between 2012 and 2019 according to the EIA’s report as inaccurate. He said four hundred and eighty-nine thousand, seven hundred and sixty-six (489,766) rosewood trees were collected within that period per the Chinese import data.

“The committee, on the other hand, admits that there are significant differences between the volumes of rosewood timber imported by China and exported by Ghana, due principally to the deliberate misclassification and mis-declaration by freight forwarders, as a result of a lack of institutional capacity in GRA-Customs in relation to timber species identification,” he stated.

Also contained in the committee’s report are a number of recommendations which the minister cited at the briefing.

The committee, according to him, recommended “extensive interagency collaboration” among the Forestry Commission, the Police, the GRA-Customs and the intelligence agencies to sustain enforcement of the ban on movement of such endangered tree species as rosewood.

“Effective collaboration between GRA-Customs and TIDD at the port of exit is very essential especially in the identification of wood species before exports. The committee was unable to prove the allegations made by EIA that CITES [Convention on International Trade in Endangered Species] permits were for sale based on investigations of witnesses— both material and persons. The video footages and other materials from the EIA did not provide enough evidence of collusion.

“The committee recommends that a forensic audit of the CITES Secretariat at the Forestry Commission of Ghana be conducted by the BNI or any other State Intelligence Agencies to establish the veracity of the allegations made. The Committee’s investigations revealed that a number of permits issued for rosewood were diverted to Vietnam and the volumes approved on the permits were altered. Collaboration with Vietnamese Customs showed that some companies produce such fictitious documents at the blind side of Ghanaian officials. The committee recommends that a similar forensic audit should be conducted on some selected companies who have been engaged in this fraudulent export trade,” the minister announced.