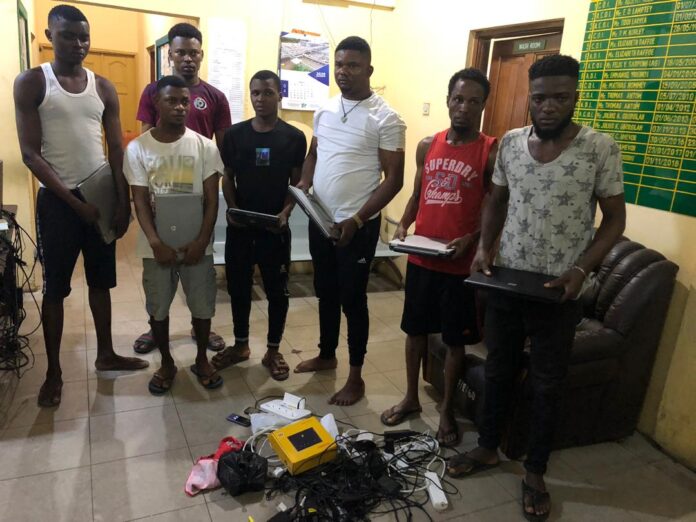 Some seven Nigerian nationals have been arrested at Avoeme in the Ketu South Municipality of the Volta region by the Aflao Sector Command of the Ghana Immigration Service for allegedly engaging in cyberfraud.

The seven persons, who were arrested upon a tip-off on Wednesday, 8 April, 2020 at about 19:30hrs in the evening, are occupants of a 3-bedroom apartment, fully fitted with state-of-the-art facilities.

According to sources within the GIS, the gang operates under the leadership of Fidelis Aziegbemhin who hails from Edo state in Nigerian but have lived in Ghana for 2-years.

Upon interrogation, Fidelis told the immigration officials that he was brought into the country with 14 others by another Nigerian called Olamide to assist him in a ‘419 business’.

“Olamide however, relocated to the Benin Republic after he was being chased by the security services in Accra,” a source disclosed.

Fidelis also moved to Aflao early this year, where he recruited 7 other Nigerians who now work for him as cyber fraudsters.

Our source also disclosed that, “the syndicate is being assisted by another Nigerian but a resident of Aflao known as Osaro, who facilitated accommodation issues for the gang.”

The 7 has since been handed over to the Aflao command of the Ghana Police Service for further investigation and prosecution.