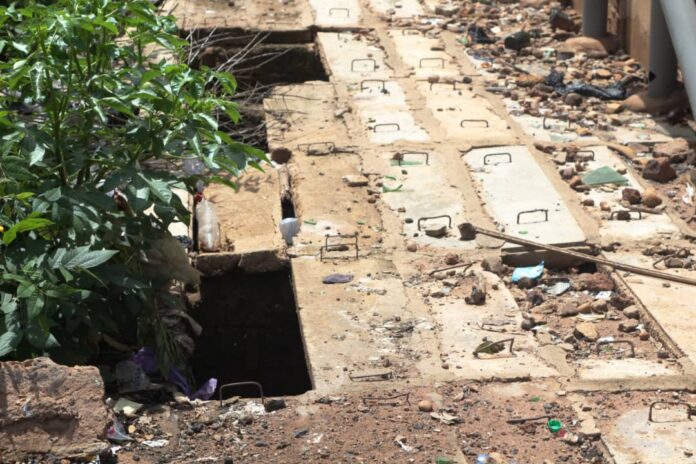 Residents of Tease, the District Capital of Afram Plains South, are calling for the rehabilitation of public toilet facilities in the community.

Four public toilet facilities serving the Community are in perilous conditions with some on the verge of collapse endangering lives of persons who patronize the facilities.

Apart from this, the public toilet facilities are full but not being emptied due to financial constraints and lack of vacuum truck at the Afram Plains South District Assembly.

Over the years, the Public Toilets are emptied through manual means by persons hired outside the district but that seems expensive for the Committees in charge of the toilet facilities citing inadequate revenue.

The suckaway pits of some of the toilet facilities have also developed deep cracks spilling over the human excreta which emit pungent stench to nearby homes whiles breeding house flies exposing residents to various diseases.

With the onset of the rains, residents fear an outbreak of Cholera is imminent.

A toilet operator told Starr News, few people who visit her facility refuse to pay 20 pesewas charge claiming because the facility is not neat.

“People don’t come here but the few who come too they don’t want to pay Whenever they come here that the place is dirty and smells. We always fight with them .So we want the toilet rehabilitated.”

Some residents appealed for rehabilitation or construction of a befiting public toilet facilities to serve the district Capital.

“This is Tease, a district Capital but look at our toilet facilities, very deplorable.The toilets are collapsing now we don’t even allow our younger children to attend because it can cave in anytime”

“As for me I don’t go on that toilet. When I go to my farm I just go to toilet in the bush.They say we should build our own toilets facilities in our homes but this is a farming Community we don’t have money .Look around there are houseflies all over .The stench from the toilet alone is dangerous for us living around.”

Some Children were seen risking their lives just to attend to nature’s call in a collapsing toilet facility which has been closed for public use but many residents still sneak to ease themselves due to absence of toilet facilities in the area.

“They say we should not come here again but people come. My little sister defecated in the bush here but I went inside they have defecated all over the place”.

“The situation is worrying but the assembly is discouraging dependence on public toilet facilities so we want people to have their own toilet facilities.The only challenge is that there is water challenge in this community we don’t have taps in our homes only depend on few boreholes but we have been promised some more will be drilled”

Tease Community is deprived of many basic social ameneties such as tarred roads, pipe borne water, robust health system among others despite being one of the food basket areas of the community.