Suhum Constituency Executives of the opposition National Democratic Congress NDC are accusing the Police and the Electoral Commission of conniving with the ruling New Patriotic Party to register non-residents bused from Accra and other neighbouring constituencies.

The Party provided pictures and videos purported to be persons transported in busses and other vehicles from New Abirem, Nima, Maamobi, Ayensuano, Gbawe, Kyebi, Ayensuano among others to register in Suhum for a fee of Ghc50.

According to the NDC, their party agents and Constituency Executives who protest the registration of these non-residents have been beaten by the NPP supporters marauding in the Constituency without being arrested by the Police.

They said the Police have instead arrested two of their Constituency Executives, Organizer and communication officer, for resisting the registration of non-residents.

Addressing the media Monday, the Constituency Chairman and his Vice Joseph Apoo and Philip Triku respectively recounted numerous incidents of intimidation perpetrated by the NPP.

According to them the party, they will fight back to defend themselves and protect the sanctity of the Voters register.

They accused the EC of subtly preventing the NDC from challenging suspected non-residents by denying their agents challenge forms.

“The top hierarchy of the NDC in Suhum Constituency is therefore sounding strong warning to the NPP to desist from all these nefarious activities to forestall peace and sanity to prevail in Suhum.

“The NPP cannot pinpoint to any developmental project in this Constituency as being achieved under them so they have resorted to busing in People to come and make that decision on 7th December but trust me the NDC within the Suhum Constituency we are going to prevent that. We are going to vehemently prevent and oppose that whatever it takes we are going to do it, we are not going to take the laws into our own hands we are going to use any legitimate means”.

The communication Officer Daniel Chanor said the NDC will now fiercely resist any attempt to register a non-resident.

“From today onwards we will not sit down if you are immigrant and if because of Ghc50 you want to register here to choose our MP for us then we are telling you that prepare because we also going to prepare ourselves because we have noticed that the Police are not in to help us and the EC is also in bed with the MCE in the fraud”.

He said so far four persons from both NDC and NPP  have been arrested. He said  one is to reappear before court on July 17, 2020 while the others are on bail being prepared to be put before court .

He said the Police is not mandated to interfere in the registration process, therefore, urging the political parties to make use of the challenge measures instituted by the EC to file cases against persons they suspect to be non-residents instead of assaulting or Physically resisting them. 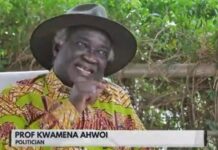