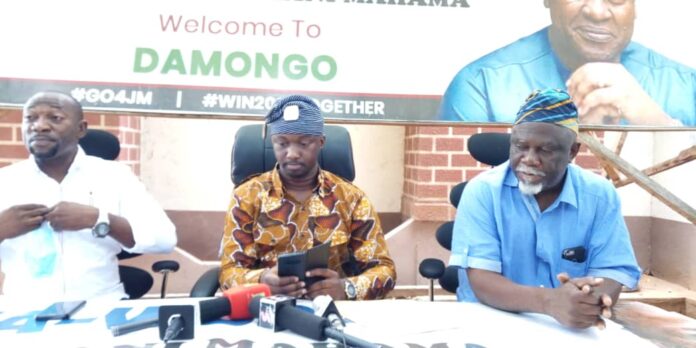 The Savannah regional has launched “operation protect your polling station ” for the ongoing voter registration exercise.

According to the NDC, the rampant busing of ‘aliens’ into the region specifically the Damongo constituency is alarming.

Addressing the press in Damongo, Savannah regional communication officer of NDC, Abdul Maleek Bansitale, said the party will implement the “boot for boot” slogan strategically to safeguard the peace of the region.

He said the NDC and its supporters in Damongo are continually been intimidated by ‘tags’ of the NPP anytime they attempt preventing aliens from registering.

Several supporters of the NDC including the Damongo constituency communication officer of the party, Kiyoyo have been attacked by individuals the party calls “NPP rebels”.

They have therefore vowed to resist the NPP’s action regardless.

“we will much them boot for boot, we will resist them with our last blood and we are starting now,” Basintale said.

He also served warning to anyone who will “fall for Abu’s money” and allow themselves to be bused to Damongo for registration to desist or put themselves in danger.

“we will face them squarely, from today anyone who allow themselves to be bused to Damongo, we are going to meet them halfway into Damongo and return them. But who knows maybe they will not return the same way their family sent them out”, Basintale added.

Meanwhile, the National first vice-chairman of NDC, Chief Sofo Azorka, has chastised the EC for what he describes as ” poor registration exercise “.

“This is the poor registration ever in the country, Jean Mensah and Bossman, tell them is poor”, Azorka said.

“if you bring people to register it doesn’t mean they will vote for you, the NPP should know,” he said.

The NDC and NPP have been at each other’s neck in the Savannah region since the beginning of the registration exercise.