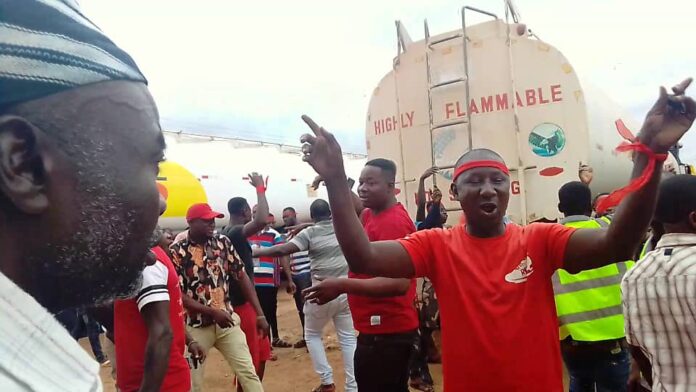 The Fuel Tanker Drivers Association operating at the Buipe depot in the Savannah region has declared an indefinite sit down strike over the refusal of the Bulk Oil Storage and Transport, BOST management to fix malfunctioning loading meters at the depot.

While protesting over the issue, the drivers on Monday, October 7 refused to load fuel nor listen to management of the company until their plight is addressed.

The loading meter equipment at the depot, the drivers indicated has been malfunctioning for over a decade, a situation they said continuously give them shortages at the delivery point.

They noted that the loading meters at the Buipe depot does not give accurate figures as its figures does not correspond with the amount paid for the products.

Some of the drivers recounted several occasions where they go to fuel stations to deliver fuel and encounter shortages. They lamented that, some tanker owners refuse to pay drivers their monthly salaries as a result of debts they pay to fuel station owners due to shortages.

They accused BOST management of a deliberate attempt to extort from them at the depot.

Speaking on behalf of the Tanker drivers association, an association member, Yuma Joseph, noted that several letters have been written to management of BOST, but no action has been taken hence the strike. He indicated that, the drivers will not to operate until their concern is addressed.

“The loading meters aren’t consistent and do not give accurate figures or measurement thereby creating problems at the delivering point. After loading at the depot, you only get the products not up to what you are expected to get. That is the cause of our strike today. We are telling the authorities responsible to come and fix the meters so that we can go in to start our normal operations without being cheated. These meters broke down over a decade, but it’s been only promises. We are not seeing results,” he said.

Leadership of the association have also threatened to boycott Buipe Bost and buy at Tema if management fails to resolve the problem within few days.

The Buipe Depot is the central holding point of BOST serving Northern Ghana. It receives products through river barges via the volta lake and through Bulk Road Vehicles, BVRs loaded from Accra plains depot of BOST.

The sit down strike if not called off is likely to affect fuel supply in the northern part of Ghana.

All attempts to speak to the management of BOST at Buipe proved futile.