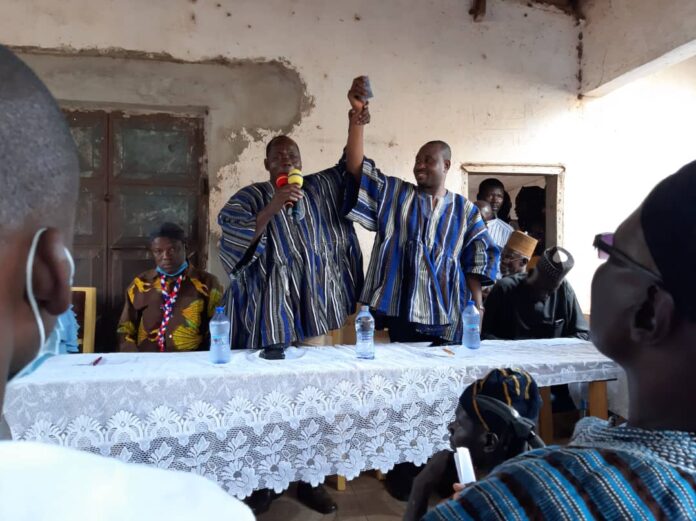 Parliamentary hopeful of the NPP in the Wulensi Constituency in the Northern Region, Alhaji Abdulai Haruna, has united disgruntled supporters of the party in the Constituency ahead of the December polls.

The unity deal was brokered by the aspirant following series of meetings to calm the nerves of his supporters who rejected the outcome of the NPP’s Parliamentary primaries.

Alhaji Haruna lost controversially by two votes to the incumbent MP in the constituency, Thomas Donko Ogaaga. The outcome of the polls attracted attention from the Northern Region to the national headquarters.

But, Alhaji Abdulai Haruna initiated reconciliation moves to unite the party in the area ahead of the elections. Before the unity talks, there were lots of agitations and accusations of impersonations of delegates, ghost names among others during the voting process.

The agitations led to scuffles with angry supporters burning the party’s constituency office and a pickup truck after staging a massive demonstration. The supporters vowed not to support the incumbent MP with several threats issued to vote against the party in the upcoming elections.

However on Saturday, Alhaji Haruna convened a reconciliation meeting at his residence in Wulensi where he called for unity and forgiveness in the party. He promised to fully support and campaign for the party and the candidate to win the elections and retain the seat.

“I am committing myself and my supporters today to fully participate in the campaigns for the party and the candidate to win massively. I pledged to commit resources and my strength to ensure victory in the December elections so that Nana Addo wins and the incumbent retains the seat. The party is supreme and I called on my supporters to bury the hatched and join the campaign with the love they have for me” he said.

He showed commitment to the peace process with new initiatives in support of campaign ahead of the December elections. Consequently, he donated 15 motorbikes to support the campaign.  He further added 10,000 Ghana cedis cash for renovation of the office and gave 100 plastic chairs for use in the party office that was burnt.

On his party, the incumbent MP, Thomas Donko Ogaaga, expressed profound gratitude to the defeated aspirant for the kind gesture demonstrated.

“I am seriously overwhelmed by the commitment shown by Alhaji Haruna, I want to thank him and his supporters for the love shown and we commit to fully work together.”

The First National Vice Chairperson of NPP, Madam Talata Asobayire, who witnessed the unity and peace talks, commended Alhaji Haruna and the party’s supporters and encouraged them to show commitment, indicating that the party has good plans for the constituency.

“I want to extend the gratitude of his excellency the president Nana Addo Danquah Akufo-Addo to the good people of Wulensi and to tell you that he (President) has good plans for you. Alhaji Haruna has shown that he is a true leader and we have taken note of him, I therefore encourage you to support the party and ensure we win both presidential and parliamentary in the constituency”

The Northern Regional Minister, Salifu Saeed, who is a son of the area, assured the people of his unflinching support to rally behind Alhaji Haruna to restore confidence in the people through the influential prowess he has gained in the constituency over the years.