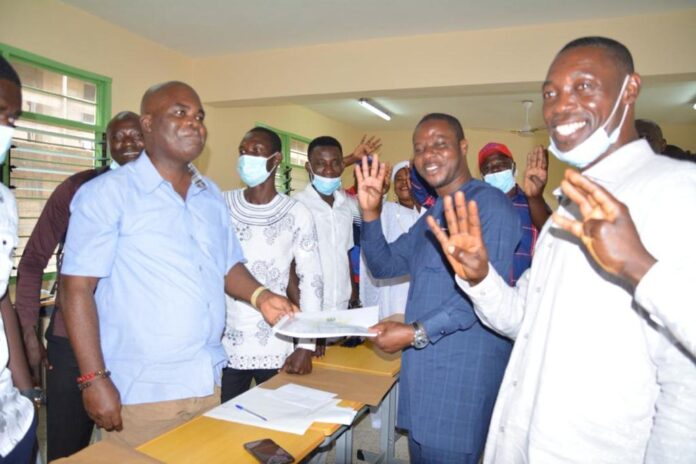 The parliamentary candidate for Bortianor Ngleshie Amanfro, Sylvester Matthew Tetteh, has submitted his nomination forms to contest in the 2020 parliamentary elections.

The C.E.O for National Youth Authority is hoping to be cleared to lead the New Patriotic Party (NPP) in the constituency into the polls slated for December 7, 2020.

He submitted his nomination form to the returning officer Mr. Mingle at the District Office of the Electoral Commission at Weija. He was accompanied by the Constituency Chairman, Mr. Paul Baako, party executives and coordinators, some volunteer groups, party faithfuls and party sympathizers .

He is seeking a first term in office after defeating the incumbent member of parliament, Alhaji Habib Saad at the NPP’s primaries held in June this year.

Touching on the controversies and brouhaha by some smaller parties and even the Center for Democratic Development (CDD) about the hikes in the filling fee by the electoral commission, he said the amount is generous considering what is used in printing ballot papers, other electoral expenses and what has been charged in previous years, specifically 2016.

He has asked the CDD to be concerned about the non-existence of smaller parties in the various constituencies as required by law and not show up only during election years to make noise.

Mr. Tetteh has also advised the smaller parties to stop criticizing the EC. He urged the EC to be fair and transparent in the electoral process.