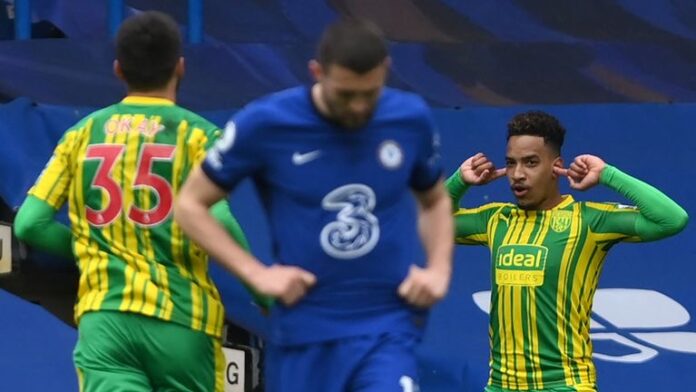 Thomas Tuchel’s unbeating run at Chelsea has come to an end. However one thing that comes as a shock to many is the team to which he lost to, 19th placed Westbromwich Albion.

After taking over the team from Frank Lampard in January,Tuchel has overseen 11 Premier League games.

In these 11 PL games, he’s come across several renowned tacticians such as Carlo Ancelotti,Jürgen Klopp and Marcelo Bielsa and did not disappoint.

However, this afternoon Thomas Tuchel’s Chelsea were shocked at home today when relegation threatened WestBromwich Albion led by Sam Allardyce beat Chelsea to a pulp 5-2 at Stamford Bridge.

This victory is WestBrom’s first since 1978 and this ends Chelsea’s 10 game unbeaten run as well as their four consecutive clean sheets in the premier league.

Before this game,Chelsea had one of the best defensive records in the league and had only conceded two goals since Thomas Tuchel burst on the scene with one goal being an own goal from Antonio Rüdiger.

The odds were highly in favour of Chelsea with even a draw for WestBrom unlikely until a 28th minute red card for Thiago Silva.

Then all hell broke loose, the Chelsea team was immediately thrown into disarray with Matheus Pereira scoring a brace in less than 10 minutes to put The Baggies 2-1 up.

In the second half,the Baggies ensured that the Blues “paid for their sins” by adding 2 more goals from Callum Robinson and Mbaye Diagne.

Robinson had not scored again since his brace against Chelsea earlier in the season.

Mason Mount then halfed the deficit through a tap in assisted by Timo Werner later on.

Robinson then cemented WestBrom’s 4th victory of the season by adding a 5th goal in stoppage time to take the game out of the reach of Chelsea.

This is a remarkable feat for WBA who themselves are struggling to steady their boat in the Premier League.

Chelsea will face Porto in the Quarterfinal stage of the UEFA Champions League on Wednesday and will then clash with fellow Londoners Crystal Palace on Saturday.