Ghana Football Association (GFA) president Kurt Okraku has rubbished media reports of the Ghana’s intention to camp Black Stars in Europe next month despite the postponement of World Cup qualifiers.

The Black Stars will not be in action in June after Confederation of African Football (CAF) moved the games to September due to challenges caused by Covid-19.

Akonnor’s side were billed to play Ethiopia and South Africa in June but the games will now be played in September.

A void has been created as a result of the postponement and GFA want to fill it by organizing a European tour for the team, according to a report in the Ghanaian media.

The GFA desire to camp players in Europe to allow the technical team to further assess the team and will use the qualifying dates for friendly matches.

The report adds that a communique has been sent to the Sports Ministry for approval of the association’s program. 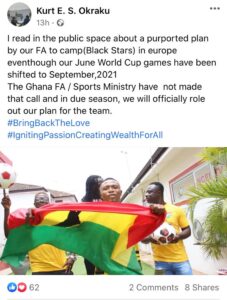 Reacting to the report, Kurt Okraku wrote on Facebook: “I read in the public space about a purported plan by our FA to camp (Black Stars) in Europe even though our June World Cup games have been shifted to September, 2021. The Ghana FA / Sports Ministry have not made that call and in due season, we will officially role out our plan for the team.”

The Black Stars are hoping to qualify for the World Cup in Qatar after missing out on 2018 edition in Russia.

They are in same group with Ethiopia, South Africa and Zimbabwe.