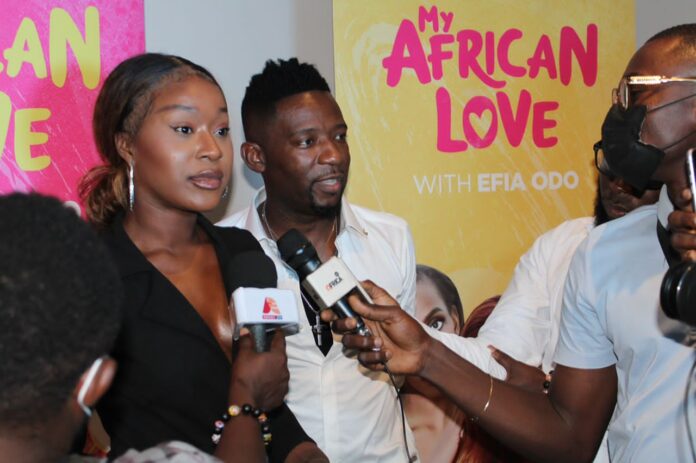 Ghanaian-American-born actress and brand influencer, Efia Odo, is at the crossroad in finding a life partner in an all-new reality TV series dubbed ‘My African Love with Efia Odo’

Speaking at the press launch, the Creative Director and the co-producer of the new reality show ‘My African Love with Efia Odo’ Kobby Maxwell said, the series is unlike any popular Hollywood love story. It dips into a rather unconventional twist in a lady’s quest to find love amidst betrayals and heartbreaks.

She ignores the red flags and warnings from her friends and family of the absurdity of finding love on a reality show to personally host an auditioning for a selection of 15 men to contest in what she terms’ an in-house competition ‘in the hope of her finding her one true love.

He said, “The series stars Hollywood actors and other actors from other countries. Efia Odo gave a spectacular performance, she was entertaining. The whole crew was a phenomenon. The series is centred on the true story of Efia Odo who the series”

According to Kobby, the series will be premiered on December 19, 2021. It features   Andromeda Peters (Miss United States 2018/2019) in her film-making debut with this series and the award-winning media personality, Charlie Dior. Chris Attoh is the presenter along with a host of others given an ecstatic feature on the show.

Speaking to Efia Odo, she said, being the lead character and the only female in the show challenged her to work extra harder on set, “And of course I loved the attention from the men. This show is all about me, am looking for love, this show shows how hard am trying to find love and how hard the men were trying to win my love. I am very optimistic about finding love. “

The Ghanaian- American based film producer Kobby Maxwell with his production house KOBY MAXWELL PRODUCTION, are producers of One Night in Vegas, Paparazzi Eye In The Dark, Chris Attoh Journey to Hollywood, and The Wrong One.