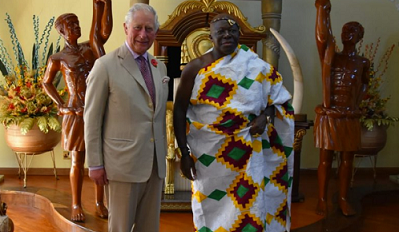 Ghana’s revered King, Otumfuo Osei Tutu II has politely turned down an invitation extended to him and his spouse, Her Royal Highness Lady Julia Osei Tutu to attend the Royal funeral of the late Queen Elizabeth II, former Queen of the United Kingdom.

The British Royal family secretariat through the instruction of King Charles III, extended an invitation to the 16th King of the Asante kingdom, and his spouse to attend the royal funeral in London on Monday, September 19.

Unfortunately, the Asante traditional restrictions make it impossible for the King to attend the funeral, a traditional source at the Manhyia Palace said.

The source added that the Asante tradition restricts the King from viewing the remains of a dead person, therefore, his inability to attend the all-important state funeral of the Queen.

However, deputy Protocol officer to the Manhyia Palace, Emmanuel Osei Sarfo disclosed to EIB’s Ashanti Regional Correspondent, Isaac Justice Bediako,  that the Asantehene’s decision not to attend the funeral is personnel and has nothing to do with the Asante’s tradition and culture.

“On 8th September 2022 Manhyia received the invitation to attend the funeral and the palace equally responded formally to their Buckingham Palace secretariat on 15th September 2022 of the King’s inability to attend the funeral based on the invitation received. Otumfuo’s decision has nothing to do with tradition and it is rather personal. King Charles III is already in the know of that. I’m aware the King has personally spoken to him,’’ he explained.

He further added “Once Otumfuo has declined the invitation to attend the funeral on personal grounds a delegation will not be sent by the palace to represent the Asantehene Otumfuo Osei Tutu II at that British state funeral of the late Queen Elizabeth II’’.

The decision has left many Ashantis disappointed as they believed the invitation was an opportunity for Asanteman to showcase Asante’s great culture and tradition to the global community at the funeral.