Road transport operators and the general public have been urged to disregard a purported increase in transport fares from the Concerned Drivers Association and True Drivers Union groups.

In a joint statement on behalf of road transport operators and signed by the general secretary of Ghana Private Road Transport Union(GPRTU of TUC), Godfred Abulbire and Emmanuel Ohene Yeboah of Ghana Road Transport Coordinating Council (GRTCC), they disclosed that “only recognized Unions have the mandate and the bargaining chip to negotiate public transport fares on behalf of all transport operators. No others groupings apart from us have the mandate to negotiate public transport fares. Any purported increase in fares by any other groupings should therefore be disregarded and treated with contempt.”

The management of GPRTU of TUC, Ghana and GRTCC further revealed that they are in discussion with stakeholders for a review of the public transport fares taking into consideration the factors that currently prevail in the transport industry and that the public would be duly informed when negotiations are concluded.

The statement follows a press release making rounds headlined ‘Transport Fares to go up by 30% from September 21 which was jointly signed by Concerned Drivers Association and True Drivers Union groups.

The group claimed that the announcement comes after consultation with GPRTU citing an increment in fuel products, spare parts, and poor management of the economy as well as electricity and water tariffs, prices of pure water, and food as factors culminating in the increase.

However, the management of GPRTU of TUC, Ghana and GRTCC maintained that no such consultation has been held with them, neither has the GPRTU increased fares without recourse to the Administrative Instrument for the review of public transport fares.

“We, therefore hold a strong exception to the actions of this group particularly for using the name of GPRTU to spread false and malicious information. Whenever transport fares are to be adjusted, we take into account, changes in various component that goes into the running cost of commercial transport including spare parts, statutory fees such as permit and vehicle income tax among others. We do not push for adjustments in fares based on fuel price alone. We want to state without any equivocation and again in any unambiguous terms that, never has electricity and water tariffs, price of food and pure water as well as management of the economy been used as a component in the review of transport fares.” the released added. 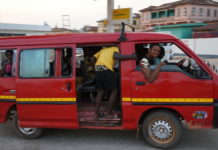 Transport fares up by 13%