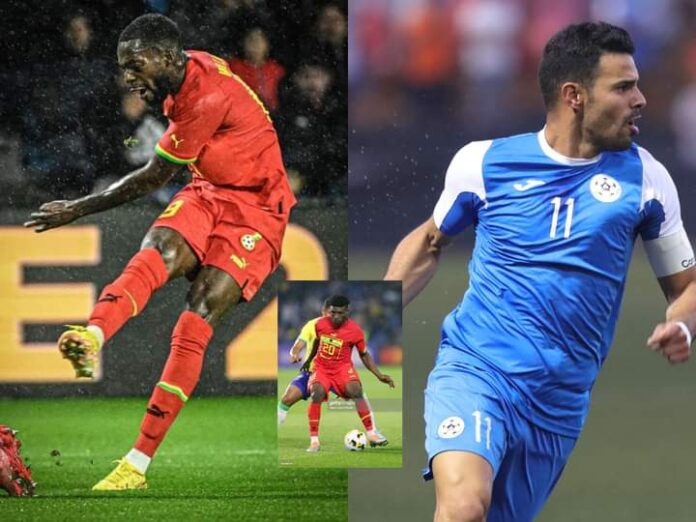 Black Stars head coach, Otto Addo, says he is satisfied with the performance of his team following their 1-0 victory over Nicaragua in an international friendly match in Lorca, Spain, on Tuesday.
He said in a post-match conference that winning the match, following their 0-3 defeat to Brazil in another pre-World Cup friendly last Friday in Le Havre, France, represented an improvement and was, therefore, taking away some positives from the two matches which formed part of Ghana’s preparations for the upcoming FIFA World Cup in Qatar in November.

For Tuesday’s match, the Ghana coach rested many of his regular players and handed starting roles to newcomers, Inaki Williams and Mohammed Salisu, including a debut international appearance for Germany-based Ransford Yeboah Konigsdorffer who came on as a second-half substitute for Abdul- Fatawu Issahaku who scored the winning goal in the 35th minute.
In a post-match interview, Coach Addo rated his team’s performance at 70 per cent and said he would build on the positives achieved by his team during the two matches.

“I’ll score the performance seven of 10 because we won. I like the runs behind the defensive line, the passes in between the lines, the body positions in a lot of good places and good timing,” he said.

Unlike the match against Brazil where scoring chances were few and far between for the Ghanaians, they had more decent scoring opportunities against the lowly ranked Nicaraguans, with offensive midfielder Mohammed Kudus wasting some clear chances in both halves. And for the coach, creating such chances represented improvement but reckoned that his players needed to exercise more patience in front of their opponent’s goalposts.

“Even though Ghanaians looked to Williams as a quality player to help solve the team’s scoring drought, the Athletic Bilbao forward failed to utilise some of the opportunities that fell his way. Nonetheless, his overall performance excited the gaffer who has promised to fix the team’s low scoring average (seven goals in seven matches since Coach Addo took charge of the team six months ago).

“We had very good runs from Inaki, diagonal runs, creating chances. We also had chances to score, but as I keep saying, we have to take it cool to score goals. We have a young squad and a lot of young players coming up,” explained the Ghana coach.

The Black Stars have been paired with Portugal, South Korea and Uruguay at the 2022 FIFA World Cup in Qatar.