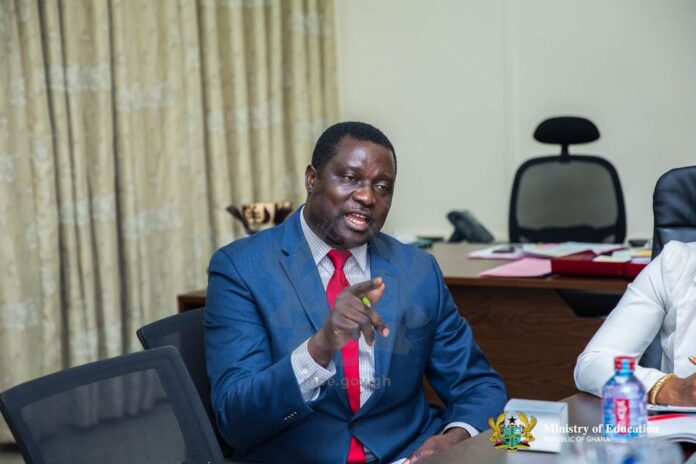 The Minister of Education, Yaw Osei Adutwum, has said that the Akufo-Addo government is investing more in the education sector to position Ghana well in the era of the Fourth Industrial Revolution.

The Fourth Industrial Revolution is the current and developing environment in which disruptive technologies and trends such as the Internet of Things (IoT), robotics, virtual reality and artificial intelligence (AI) are changing the way modern people live and work.

Speaking on the topic: “Education for the next generation,” Adutwum said the current government is transforming the sector to make it fit for purpose.

“What we are trying to do is to make Ghana’s education [system] fit for purpose so far as the Fourth Industrial Revolution is concerned,” the education minister said at the latest edition of #PatrioticSpaces on Twitter.

“We know we are in the Fourth Industrial Revolution and things are shifting rapidly,” he said. “We also have to confront the challenge of inequity within our country and outside.”

He added: “I know there are people who will say our education system has challenges. Yes, we do but these are mere hiccups. The kind of transformation work that the President is doing in the education sector is second to none. The infrastructure that we’re building across the country is part of the transformation agenda.”

Adutwum said access is key in order to produce the best human resources to compete in the global space, and to achieve this, President Nana Akufo-Addo introduced the double-track system to bridge the gap.

“Double-track system is a leapfrogging strategy for access because before the President promised Free SHS, the research that had been done indicated that it was going to take 20 years for us to be able to do Free SHS,” the minister said.

“So, when the President said ‘use double-track as is done in California and other places’ he was prescribing a leapfrogging strategy for access. Instead of 20 years, he was able to do it during his first term using a time-tested innovative strategy that increases access without waiting for the development of infrastructure over a period of 20 years,” he said.

“When we came to power, enrollment in secondary education was 800,000. Today, we’re talking about 1.3 million within a period of six years because the President adopted a leapfrogging strategy for access,” Adutwum told the over 2,000 participants.