The newly elected Volta Regional Chairman of the National Democratic Congress, Mawutor Agbavitor has earnestly began work in the Hohoe Constituency as part of moves to reclaim the Hohoe parliamentary seat for the NDC.

The NDC lost the Hohoe seat to the New Patriotic Party’s John Peter Amewu during the 2020 general elections leaving a scar on the party in the Volta region.

But Mr. Agbavitor who was elected a fortnight ago, has officially commenced work in the Hohoe Constituency towards the 2024 elections.

On Wednesday, the new Regional Chairman led a delegation of the Functional Executive Committee to a meeting with the Constituency Executives in Hohoe.

The meeting was to afford the new chairman and his team a first-hand experience with situations on the ground almost two years after that disastrous showing at the polls.

As part of the moves to recapture the seat, the team with support from the Hohoe Executives designed a new road map tailored towards a victorious election 2024.

At a recent press briefing, Mr. Agbavitor announced that the new crop of regional executives elected by the party would offer new direction to the party in the region as they head into the crucial 2024 general elections.

He again, warned the New Patriotic Party in the Volta region to be prepared enough since they [the NDC] would put in a real fight to reclaim their losses in a region considered the NDC’s would back. 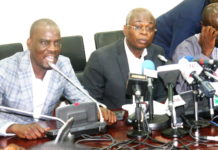