The National Media Commission (NMC) has condemned the Electoral Commission’s decision to charge accreditation fee from journalists who wish to cover the 2016 presidential and parliamentary elections.According to the NMC, the EC should immediately rescind its decision.On Monday, October 31, 2016, the commission hinted in a statement that journalists who would be covering the forthcoming polls would be required to pay a fee of GHc10 for accreditation.The statement issued under the signature of the commission’s Director of Communication, Eric Dzakpasu read in parts that: “Accreditation tags will be given to only those who have formally applied for them and for a fee to be determined by the commission.”The news angered the media fraternity including the International Standards Journalists Association (ISJA) who sued the commission.The NMC has described the decision as unfair.Speaking to Starr News’ Daniel Nii Lartey, the NMC’s chairman, Kwesi Gyan-Appenteng said the move is unfortunate and a form of restriction on press freedom.He promised to engage the Commission in order to get it to rescind its decision.Source: Ghana/StarrFMonline.com/103.5FM 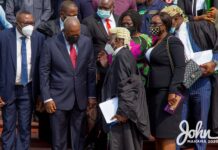