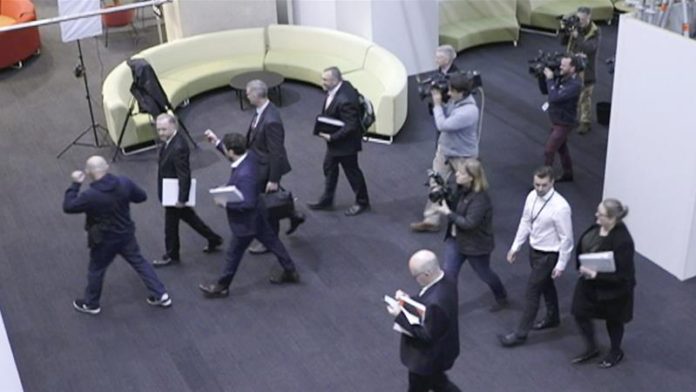 Police in Australia raided the headquarters of national broadcaster ABC in connection with a series of stories it ran in 2017 on accusations of unlawful killings committed by Australian special forces in Afghanistan.

The operation on Wednesday came just a day after police raided the Canberra home of News Corp Australia journalist Annika Smethurst about a report that detailed the authorities’ bid to gain powers to spy on citizens’ communications at home.

The Australian Federal Police said the search was “in relation to allegations of publishing classified material, contrary to provisions of the Crimes Act 1914”.

I have to say, sitting here watching police using a media organisation’s computers to track everything to do with a legitimate story I can’t help but think: this is a bad, sad and dangerous day for a country where we have for so long valued – and taken for granted – a free press

2,268 people are talking about this 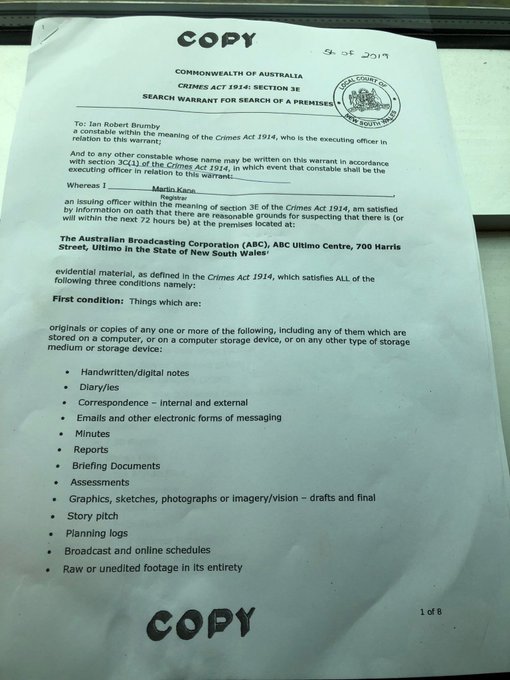 Page one of warrant…

“It is highly unusual for the national broadcaster to be raided in this way,” said Managing Director David Anderson, as the organisation tried to win legal redress.

Australian Federal Police said in a statement the warrants were carried out over “allegations of publishing classified material”, and denied there was a connection to the similar operation in Canberra on Tuesday

Both stories involved sensitive and potentially classified materials and were embarrassing to Australian authorities and the security services in particular.

The Media, Entertainment and Arts Alliance, a union for Australian journalists, branded the raids a “disturbing attempt to intimidate legitimate news journalism that is in the public interest”.

“Police raiding journalists is becoming normalised and it has to stop … it seems that when the truth embarrasses the government, the result is the Federal Police will come knocking at your door.”

Prime Minister Scott Morrison has tried to distance himself from the raids, which come just days after his re-election, insisting they were police, not government, matters.

“There are also clear rules protecting Australia’s national security and everybody should operate in accordance with all of those laws passed by our parliament.”

Kristina Keneally, the shadow home affairs minister for the main opposition Labor party, demanded an explanation for the raids.

“Protecting our national security is complex work, but it always must have the right checks and balances.”

Although the press in Australia can report largely free of political interference, strict defamation laws, court gag orders and state security statutes affect what can be said in print and broadcast.

“Australians care deeply about press freedom and if this had happened before the election it would have become a big issue in the campaign,” said Peter Greste, director of the Alliance for Journalists’ Freedom.

Greste is a former Al Jazeera reporter who was jailed with two colleagues in Egypt from 2013-2015 on national security charges brought by the Egyptian government.

“I’m not suggesting that Australia is about to become Egypt any time soon but what we are seeing seems to me to be on the same spectrum,” he said.